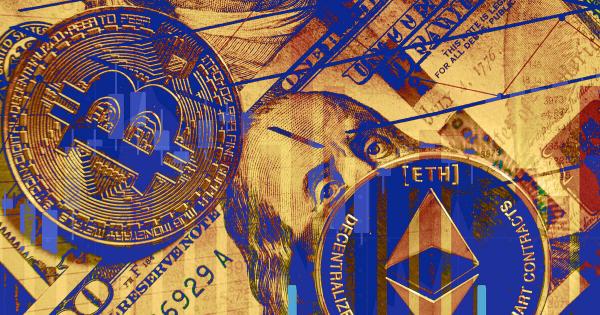 Glassnode data analyzed by CryptoSlate suggests that investors are confident holding Bitcoin and Ethereum, over stablecoins, during the current risk-off environment

As previously mentioned, billions in stablecoins have been redeemed for fiat in recent months. A significant factor in this was the Binance insolvency FUD, which sparked a run on the exchange.

However, as the FUD died down, on-chain metrics show Bitcoin and Ethereum’s buying power, relative to stablecoins, is on the up.

BTC & ETH purchasing power on the up

The chart below shows the 30-day change in stablecoin buying power on exchanges. It works by taking into account the supply of the top four stablecoins, USDT, USDC, BUSD, and DAI, then subtracting the USD-denominated change in BTC and ETH exchange flows over the period.

The orange bars refer to the 30-day USD volume of BTC and ETH being positive, i.e. when stablecoins are converted to BTC and ETH rather than USD.

Typically, during risk-off sentiment, stablecoins increase in volume as investors move to minimize the impacts of price volatility. Yet the chart below shows investors are acting contrary to expectations by increasing BTC and ETH inflows to exchanges.

The last time this happened was in October, for a brief period. Notably, the current dominance of BTC and ETH exchange volume over stablecoins has extended for approximately seven weeks at this point. This suggests confidence in the top two tokens holding current price levels.

The Stablecoin Supply Ratio (SSR) metric refers to the proportion of Bitcoin supply against stablecoin supply, denoted in BTC.

The above indicates bullish tailwinds, despite the current risk-off environment.