Research: Could Bitcoin be positioned to thrive amid global bearish signals for the US economy? Liam 'Akiba' Wright · 2 months ago · 5 min read
News › Bitcoin › Research

Research: Could Bitcoin be positioned to thrive amid global bearish signals for the US economy?

Bearish signals within the U.S. economy show consumer savings at a decade low and consumer credit at a 22 year high — could Bitcoin be the solution? 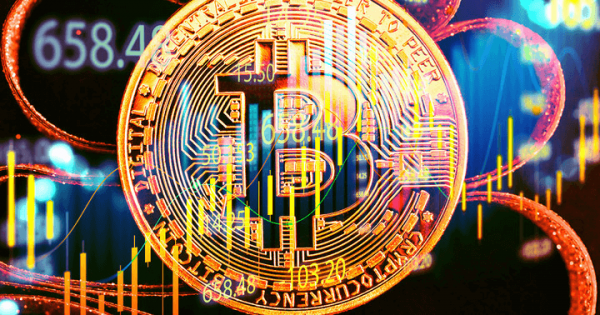 The global sentiment of the macro-economic landscape is muted following the news of a technical recession and a 75bp rate hike by the U.S. Federal Reserve. However, the crypto markets look more potent than they have been in some time, which may confuse investors.

This article will examine the factors affecting the traditional economy and how these may impact the crypto industry.

A recession is commonly understood to be a period of temporary economic decline during which trade and industrial activity are reduced. It is generally identified by a fall in GDP in two successive quarters, but the White House has recently pushed to ensure other economic factors are also considered.

The first quarter of 2022 saw negative GDP growth, and the Atlanta Fed predicted another negative quarter of GDP before the official announcement on July 28 confirming the decline in GDP.

Following two consecutive quarters of negative GDP growth, the Atlanta Fed was modeling its third-quarter GDP forecast for the U.S. economy at +2.1%. However, the latest PMI, construction, and spending data points to an estimate of +1.3%. The same pattern occurred in the second quarter, with a positive outlook at the beginning of the quarter and a negative one at the end. 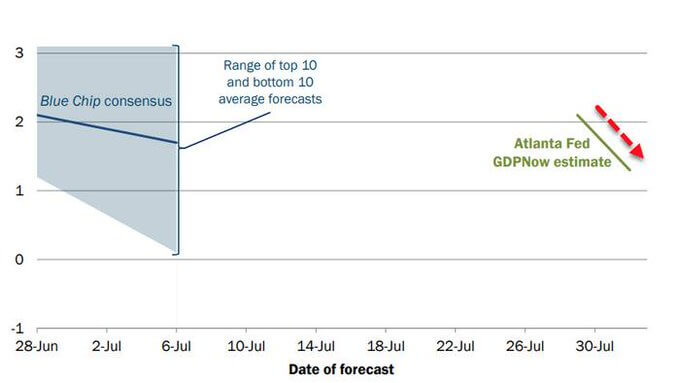 Following the FOMC meeting last week, the FED is tightening at its fastest rate of change to get rampant inflation under control. The question is, how much more can the markets take without something breaking?

According to the Federal Funds Rate, the market may only have the potential for one more rate hike until something breaks. Since 1987 every time the funds rate has hit the red line, the FED has backed off, creating a lower low in the process.

Severe Slowdown in the economy

There are several warning signs that we see a severe economic slowdown, and they could be the tip of the iceberg.

Consumer savings in the U.S. being at the lowest levels in over a decade with interest rates increasing alongside consumer debt is a sign of low liquidity among ordinary people. The charts from the Federal Reserve below show the magnitude of the issue.

Inflation in goods and services that are needed day-to-day alongside deflation in asset prices could cause a wealth of volatility in global markets.

Luke Gromen, the Founder & President of Forest for the Trees, highlighted that the FED is stuck between a rock and a hard place.

Consensus has repeatedly ignored that the Fed has never started a tightening cycle with US Federal debt/GDP or deficits/GDP this high.

It is why we’ve been saying “the Fed is no longer operating a dial, it is operating a switch with just 2 settings: US economy on or off.” Off👇 https://t.co/ShEs5ttaIh

The price of Bitcoin soared in the days following the FED announcements but saw a 7% correction over the weekend going into Monday’s first trading session of the week. Bitcoin gave up its gains since the news of a technical recession broke on Thursday, July 28, but, at the time of writing, it is still up 7.5% since the FOMC meeting announced the 75bp rate hike on July 27.

However, local trends are not indicative of long-term market performance, and Bitcoin’s price action over the past week does not necessarily mean a bull market is back on the cards. Ethereum has led the charge in the recent positive crypto market movements, up 10% against Bitcoin since July 27.

Amid global concerns, Bitcoin Maximalist Michael Saylor stated that the need for Bitcoin was at an “all-time high” in a Tweet Friday. Earlier in the week, he cited the ability of Bitcoin to act as a “global settlement network,” alluding to its potential as the world’s reserve currency.

All commodities require energy. Since #bitcoin is a commodity it can serve as global digital money. Bitcoin's economic function is to provide property rights to 8 billion people as well as a global settlement network that has already cleared $17 trillion dollars so far this year. pic.twitter.com/kJz6sCLlCU

Should Bitcoin become a global settlement layer for the world’s economy, the economy would adopt a pre-defined monetary policy as set out in the Bitcoin Whitepaper. The ability to print additional money would be removed, assigning property rights to individuals instead of central banks.

Austin from Bitcoin Magazine highlighted that the U.S. Dollar is in the “top 10 worst debt/GDP ratios” in a recent post, further adding to the argument that the fiat system is failing.

The global reserve currency country is top 10 worst debt/gdp ratios. #Bitcoin is the insurance to that fiat system. pic.twitter.com/jj28Gjl6DM

DeFi analyst, The Genie, also commented that the FED could be under pressure to print more money before the next Bitcoin halving leading to another Bitcoin bull market. CryptoSlate analyzed this scenario in April 2022 and the potential for Bitcoin to hit $120k by 2025.

Crypto will be fine.. I’d bet the fed will print more $ by 2024 and #crypto pumps massive again. The main goal is to keep the dollar as the global reserve currency.

The Democrats will have to much political pressure to prop up the economy for the next election. #Bitcoin

The below chart shows the impact of the U.S. money printer alongside the price of Bitcoin. The top cryptocurrency recorded a 600% increase since late 2020, when the Federal Reserve drastically increased the money supply. Over the same period, from September 2020 to September 2021, the M1 Money Supply increased by 440%.

In 2018 Allianz reviewed the potential fallout of the Dollar losing its status as the world’s reserve currency. The article stated, “perhaps it’s only a matter of time until the dollar goes the way of the denarii, ducat, guilder, and pound – and one or more upstarts rise to take its place.”

Many believe that Bitcoin has the potential to fill this gap. However, the U.S. is likely unwilling to relinquish its status as the premier global currency.

“Giving up reserve-currency status may help the country balance its trade relationships, but it would likely hurt the value of the dollar and create inflationary pressure on the prices of consumer goods.”

In a time where “inflationary pressure” is at its highest in 40 years, losing its reserve currency status could be disastrous for the U.S. economy.

Economist Carl Menger commented on July 26 that Jerome Powell identified that the emergence of a new contender for the world’s reserve currency would not be felt “right away.” Is Bitcoin already on the path to becoming the reserve currency? Some may say yes, but we also say, “we are still early.”

What if someone came up with a better more liquid currency that people prefer over the USD?

„I don’t think we would feel it right away, but it would diminish the USD status as reserve currency over time.“ – JP, FED chair pro tempore

Fortunately, we already have #Bitcoin. pic.twitter.com/NnkaVDXupY