American football player, Richard Sherman, has always been an avid supporter of cryptocurrency and Bitcoin, but not so much when it comes to his grandmother. 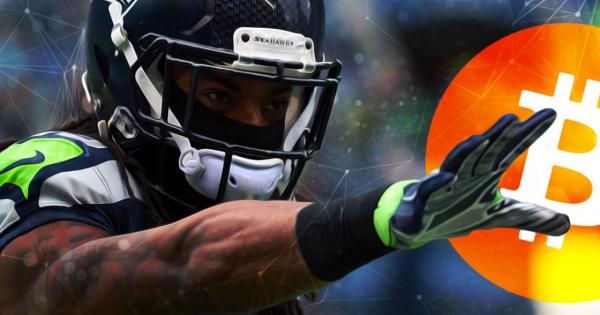 American football player, Richard Sherman, has always been an avid supporter of cryptocurrency and Bitcoin, but not so much when it comes to his grandmother.

The cornerback has made headlines for several reasons lately. The Seattle Seahawks player and Stanford University graduate made history when his $57.4 million contracts ensure his position as one of the best-paid cornerbacks in the NFL. However, Sherman is also a well-documented cryptocurrency enthusiast.

Sherman’s enthusiasm stretches too far before the Bitcoin boom of 2014 when the football player began accepting Bitcoin payments on his fan merchandise website.

In an interview with CNBC, Sherman stated his enthusiasm was sparked due to the ideology behind cryptocurrency.

Sherman noted how the innovation behind the ideology inspired him to get personally involved.

He started buying more Bitcoin in June 2017 when the cryptocurrency traded for around $2,000 coin at the time.

In addition, the football player boasts a diverse portfolio of cryptocurrencies that includes Litecoin and Ethereum.

In December 2017, the entire world experienced a crypto frenzy as prices of Bitcoin and other altcoins climbed to reach unprecedented highs. Bitcoin especially made waves when it reached $19,000 per BTC. Bitcoin’s dominance was confirmed to Sherman, however, when his grandmother started asking if she should be investing in it.

Sherman remembered his grandmother asking him to buy Bitcoin for her. According to him, she asked him to purchase a “couple of the Bitcoin” so that the family might hold the cryptocurrency.

Despite Sherman’s own enthusiasm, he urged his grandmother not to invest in Bitcoin. The football player explained to her that it was a volatile and speculative investment. In addition, Sherman said that the moment she actually had to use a computer and do the research, her curiosity quickly faded.

From Injury to Crypto Spokesman

In November 2017, a serious injury to Sherman’s Achilles tendon forced him to miss the rest of the season. Since then, Sherman has been using his time to learn more about the cryptocurrency.

During rehabilitation from injury, Sherman became a spokesman for the popular zero-fee cryptocurrency exchange platform, Cobinhood and invested in the platform’s token.

According to Sherman, the last year has shifted the public opinion about cryptocurrency, initial coin offerings (ICOs), and initial public offerings (IPOs), and that the industry was providing many people with great alternative investments. All people with the exception of his grandmother.

Knowledge is power! This is what I'll be doing while I'm away from the field… Learning about Crypto and how to trade coins #COBINHOOD #Cryptocurrency #ad pic.twitter.com/bFL7yxvg9l

While rehabilitating from injury, Sherman recently recorded a video for The Players Tribune where he talks about, among other things, cryptocurrency: