“You can make a whole lot of money on the way up, and we plan on it.” –Mike Novogratz His real name is Michael but friends call him Novo. 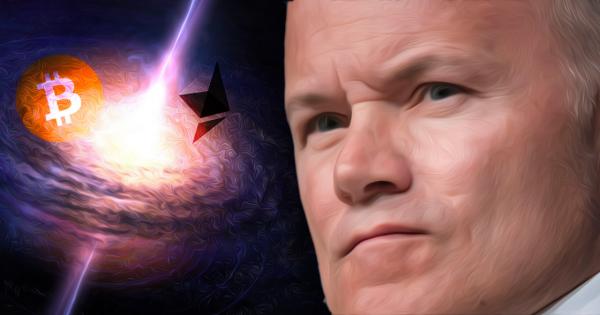 “You can make a whole lot of money
on the way up, and we plan on it.”
–Mike Novogratz

His real name is Michael but friends call him Novo. And he’s bouncing back. What makes a wrestler, helicopter pilot, billionaire and self-exiled Wall Street hedge fund legend come out of retirement? We were curious to find out – please continue reading.

Michael Novogratz, a.k.a. “Novo”, was born in 1964 and raised in the state of Virginia, US. He is one of four siblings – John and Jacqueline also joined the financial world, while Robert is a popular interior designer and reality-TV celebrity.

In high school Novo excelled at wrestling, almost becoming state champion when awarded runner-up. He continued the sport at Princeton University, where his studies earned him a bachelor’s degree and he was elected wrestling captain in 1986.

In 2007 Novogratz was named as an Outstanding American by the National Wrestling Hall of Fame, as well as USA Wrestling’s Man of the Year during 2010.

Today, he continues to serve as honorary chairman of the USA Wrestling Foundation. Novo is also an active board member of various foundations, trusts, a poverty fund, medical center and sits on several committees.

After his studies Novogratz did a stint in the New Jersey National Guard, serving as a helicopter pilot in its Air division.

During 1989 he started a career with Goldman Sachs, initially as money market salesman and financial trader in Asia. Novo was promoted to partner in 1998 and attained the position of president of operations in Latin America.

Of Fortress and a school of wisdom

Novogratz joined Wall Street firm Fortress Investments in 2002. He became principal and director of Fortress Credit Corporation in 2006, where he primarily focused on running hedge funds.

Fortress went public in 2007 and Novo’s 66.6 million shares in the Firm skyrocketed him to billionaire status after the IPO price reached $18.50.

Managing funds worth $8.1 billion at Fortress, Novo’s activities (which represented about one quarter of the firm’s earnings) yielded returns of almost 10%. He became legendary on the New York hedge fund circuit; he was also remembered for a glitzy lifestyle and flamboyant wardrobe of orange blazers, white business suits, diamond-studded belts, and cowboy boots.

However, during 2008 cracks started to show in Fortress’s macro business; the fund fell by 22% and a further 9.3% in 2011. After more declines in 2014 -partly blamed on Novo’s market calls missing the mark and wrong-way trades –  Fortress closed  during late 2015.

At the time, Novogratz was still optimistic that Fortress could be returned to profit, but with investors’ money leaving, he opted out himself and sold his shares back to Fortress for close to $256 million.

In an exit letter to clients Novo wrote:

“Closing the fund when I’m down runs counter to my DNA, and leaving investors, including family and friends, with losses is not a position I would ever want to be in.”

Exiling himself from Wall Street, Novo planned a three-week vacation in India. But before flying off, he visited a friend’s startup, crammed in a warehouse in Brooklyn, NY. It was all about cryptocurrencies, and he got hooked by the dynamic vibe of the 30 young people there; he ended up buying $500,000 of Ethereum (Ether) at less than $1 each.

In India, Novogratz attended “a school of wisdom.” The main message, he says, is that we get what we earn in this life. We should all stop whining and instead address the many opportunities and possibilities that remain.

Novo says that he also learned the key to success at the school:  Have vision and discipline, and reinforce it daily with an internal mission statement and daily meditation.

A new Galaxy rises in the digital universe

By the time Novo returned from India, his investment in Ether had multiplied fivefold in value, prompting him to buy more, following which the price increased even further, to almost $400 in 2017. He sold enough to make his largest ever single-trade profit of $250 million, paid his taxes thereon, and treated himself to a Gulfstream G550 private jet.

Flying high on his recent success (so to speak), Novogratz told CNBC earlier this week that he’s back in business.  He’s starting a $500 million crypto hedge fund called Galaxy Digital Assets Fund. The seed capital, he says, will consist of his own $150 million and the balance will come from investors – partners, family and friends.

Saying that he “never thought” he’d come out of retirement, Novo now believes that playing the whole crypto ecosystem is the right approach, including Bitcoin, Ether, blockchain, ICOs and so on. He says that he “can hear the herd coming” and that “the space is so exciting right now that I decided to build a business.”

Asked by CNBC about a possible Bitcoin bubble, Novogratz says it’s possible.  However, comparing it to the Internet bubble which reached $6.5 trillion in 1999, Novogratz says that with a total market cap of only $200 billion currently, crypto still has a very long way to go.

During a talk on Bloomberg Markets late last month, a “still private” Novogratz spokesperson announced that Novo’s two partners in Galaxy will be Richard Tavoso and David Namdar, both of whom are hedge fund traders with years of experience at firms like RBC and Millennium.

Between them, the spokesperson said, Galaxy will also offer broader services such as arbitrage, ICOs and market-making (apart from primarily being an investment fund).

“Everyone would love to leave Wall Street gracefully and very few do. You get kicked in the knees or kicked in the midsection, you learn from your mistakes, you kind of rebuild and you start your new adventure.”

Welcome back, Novo. Cheers!  Here’s to vision and discipline – Wall Street is watching with bated breath.