Billionaire investor and owner of the Dallas Mavericks, Mark Cuban puts his money where his mouth is and invests in Mintable, an NFT platform. 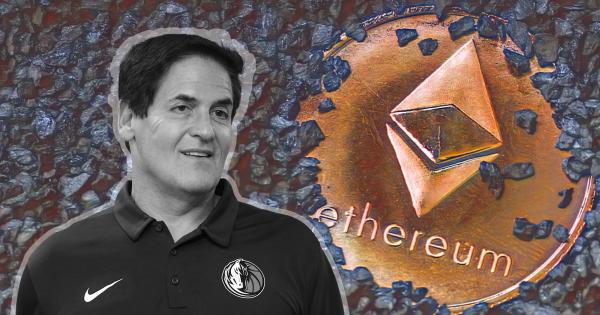 Billionaire investor and owner of the Dallas Mavericks, Mark Cuban puts his money where his mouth is and invests in Mintable, an NFT platform.

The firm tweeted that they were proud to be a Mark Cuban company and also took the opportunity to recruit staff in what is presumably a direct result of Cuban’s investment and surging demand for NFTs.

Mark Cuban (@mcuban) has invested in Mintable & we are now proud to be one of the Mark Cuban Companies!

Mark Cuban on blockchain and NFTs

Cuban has invested in hundreds of companies over the years. What’s more, his eye for spotting trends has earned him a reputation for being a shrewd businessman.

Although Cuban has only warmed to Bitcoin recently, he has always been a big fan of Ethereum. In a recent Defiant podcast, Cuban said smart contracts are why he favors Ethereum over Bitcoin. He said, with them, the scope for innovation is endless, leading to what he calls “friction-free banking.”

“ETH Has an Advantage Over BTC as a Store of Value.”

When it comes to NFTs, Cuban thinks they’ll be a game-changer and even overtake the physical collectibles market at some point.

Speaking to CNBC, he said if he were to start a business today, it would be something to do with blockchain, smart contracts, and NFTs. This area he likens to the opportunities available during the early days of the internet.

“This is like the early internet days all over again. I think [NFTs and blockchain tech is] going to be huge.”

NFTs continue to divide opinion, but there’s no doubt in his mind that they will explode (even more) in popularity.

This, he puts this down to the zoomers, or Gen Z, which denotes those born between 1997 and early 2010s. Zoomers grew up with smartphones and the internet, and according to Cuban, they consider digital just as real as physical.

Mintable describes itself as the next-gen NFT marketplace. Its platform allows users to create ETH contracts for minting ERC-721 tokens, also known as non-fungible tokens. But, their process requires no coding or technical know-how.

Add to that the option of “gasless minting,” which, as the name suggests, is a fee-free process of minting NFTs, and there’s no excuse for not creating your own digital art.

At this time, Mintable has not revealed details of Cuban’s investment. But they say more information on that will come in the following weeks.

“We will be announcing more about our seed round in the coming weeks, but we are looking forward to a very great year of 2021 for #NFTs and Mintable!”

If you remain unconvinced about NFTs, one thing’s for sure, Cuban has a track record in being right more often than not.