Liquidity solutions for the Polkadot ecosystem 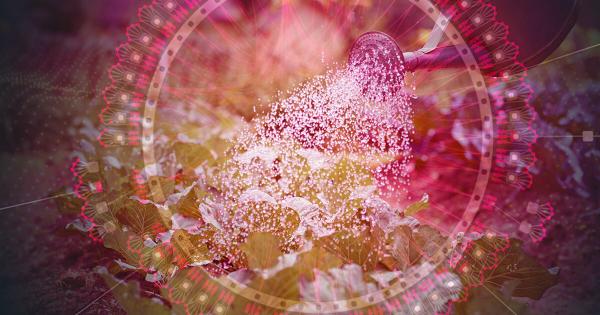 As the industry focus moves from the Bitcoin scaling problem to the Ethereum scaling problem, the Polkadot ecosystem is still evolving positively. With the parachains of Kusama and Polkadot already running solidly, whatever the solution is, it is resolving the issue of growing crypto demand with an inefficient underlying architecture.

Polkadot’s founder, Gavin Wood, has anticipated this issue during his time as CTO of Ethereum and has incorporated several excellent solutions into Polkadot’s underlying technical architecture.

The core architecture of Polkadot uses a two-tier architecture of relay chain + parachain to implement the separation of consensus security and performance of applications. At the same time, Ethereum 2.0 optimizes a beacon chain + fragmentation or Layer2 scheme, and this layered design has become a basic consensus in the design process of public chains or protocols.

The Liquidity Dilemma of Public Chains or Protocols

Regarding the underlying architecture of Polkadot, both consensus security of relay chains and resource utilization of parachains have a specific stake demand for DOT, and both requirements will lock the liquidity of DOT at the same time. After the popularization of DeFi, people have started to make a trade-off between gaining revenue through the Staking mechanism and gaining revenue through DeFi. The former maintains the underlying network consensus through the Staking mechanism, whereas the latter is the inevitable ecological development direction. Thus, how the competition between the two can be balanced to avoid losing one’s money to the other is a need for all public chains to consider. It is a question that all public chains need to consider. There are a lot of solutions to this liquidity problem, such as Lido, Bifrost, Acala, Stafi, and others.

Meanwhile, Lido has opened support for Terra, Solana, and other mainstream public chains one after another and will add support for the ecosystem of Polkadot.

What will happen to the locked liquidity of the parachain?

Starting from the Polkadot ecosystem, let’s talk about resolving the liquidity issue in the parachain auction process.

Yet a similar issue arises again. Each parachain runs with a variable DOT/KSM locked in. As more DOT/KSM are locked in, the liquidity of DOT/KSM will become less and less, and the reduced liquidity will substantially restrict the development of the Polkadot ecosystem.

With the rise of DeFi, which provides users with rich asset management tools, users’ demand for DOT/KSM liquidity may significantly exceed the demand for rewards through staking.

For this liquidity issue, there are currently three leading solutions:

To solve the liquidity problem, Acala releases the liquidity of the pledged platform token by producing a derivative asset called LDOT (its prior network Karura corresponds to LKSM). The project also uses LDOT as collateral in the stablecoin system on the one hand, and adds liquidity support through DEX on the other hand, and empowers the derivative asset by adopting these two measures, thus making the L assets with strong enough liquidity.

We can learn about its operation model through its well-run first network, Karura’s products. The product below mainly contains the core functions mentioned earlier, such as mint kUSD, DEX swap and Liquid staking. 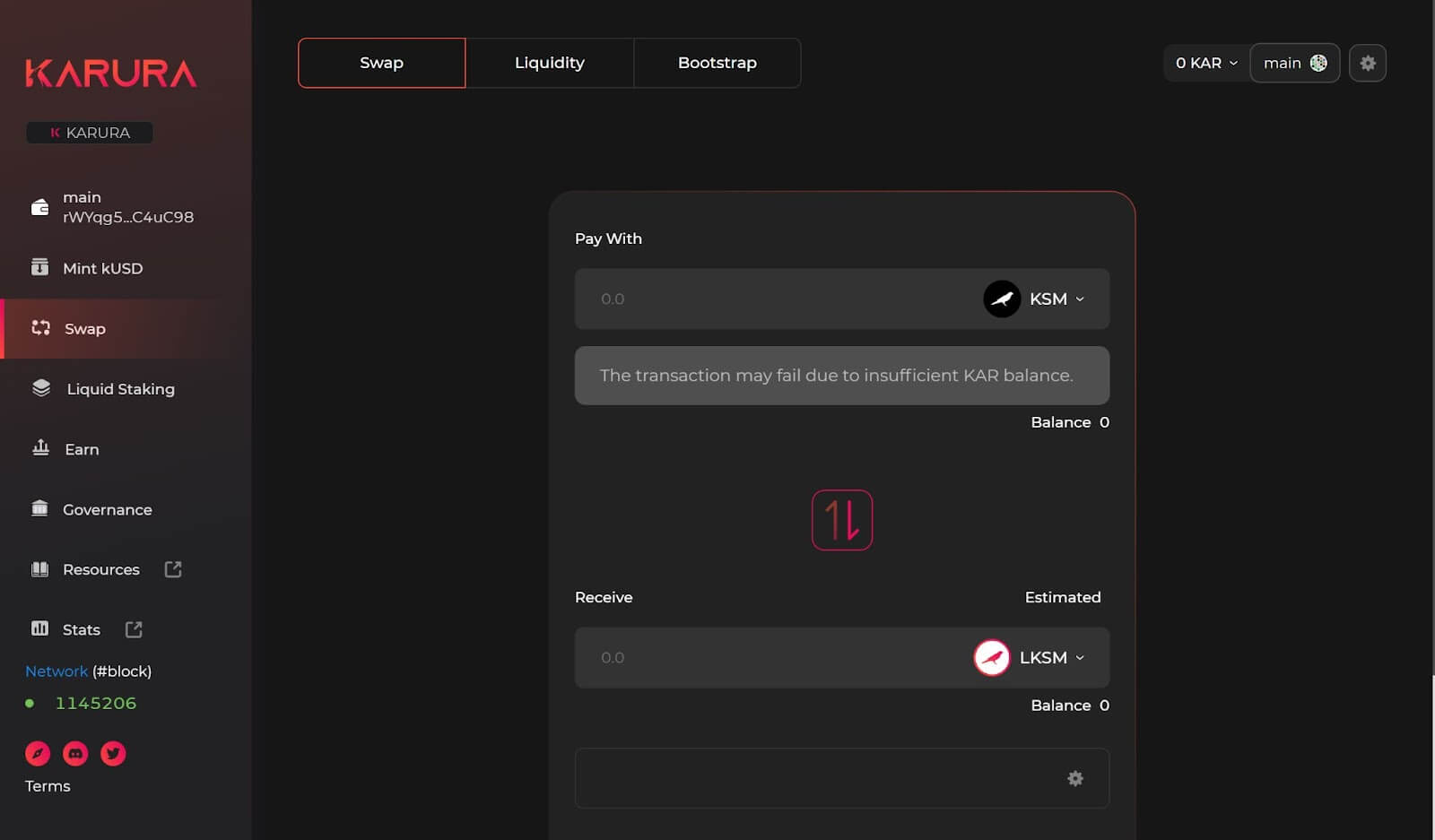 The liquidity pledge is currently only supporting the pledge of KSM and the unpledged LKSM. The pledged KSM is neither used to maintain the underlying consensus security nor for the bidding of parachain slots. Therefore, LDOT or LKSM is more like a layer of encapsulation, similar to the difference between ETH and WETH. Thus, Acala does not seem to be a complete solution to the liquidity problem.

At present, Acala has 213,000 Twitter users and 36,000 telegram users. Acala was the first parallel chain successfully elected to Polkadot, which shows its wide recognition. Acala’s first network, Karura’s token KAR, has a mobile market value of $81 million, and the token ACA on Polkadot is not yet in circulation.

Staking through Bifrost, users receive Staking revenue and the corresponding derivative assets, which can be traded, transferred, and participated in various DeFi activities. Derivative assets can be exchanged for a certain percentage of the original assets, and they also continue to earn Staking proceeds, which is an interest-bearing asset.

Since Crowdloans have become an essential feature of the Polkadot ecosystem, Bifrost has also become a crucial Crowdloan portal, and Bifrost’s liquid Crowdloan solution currently supports both Kusama and Polkadot. 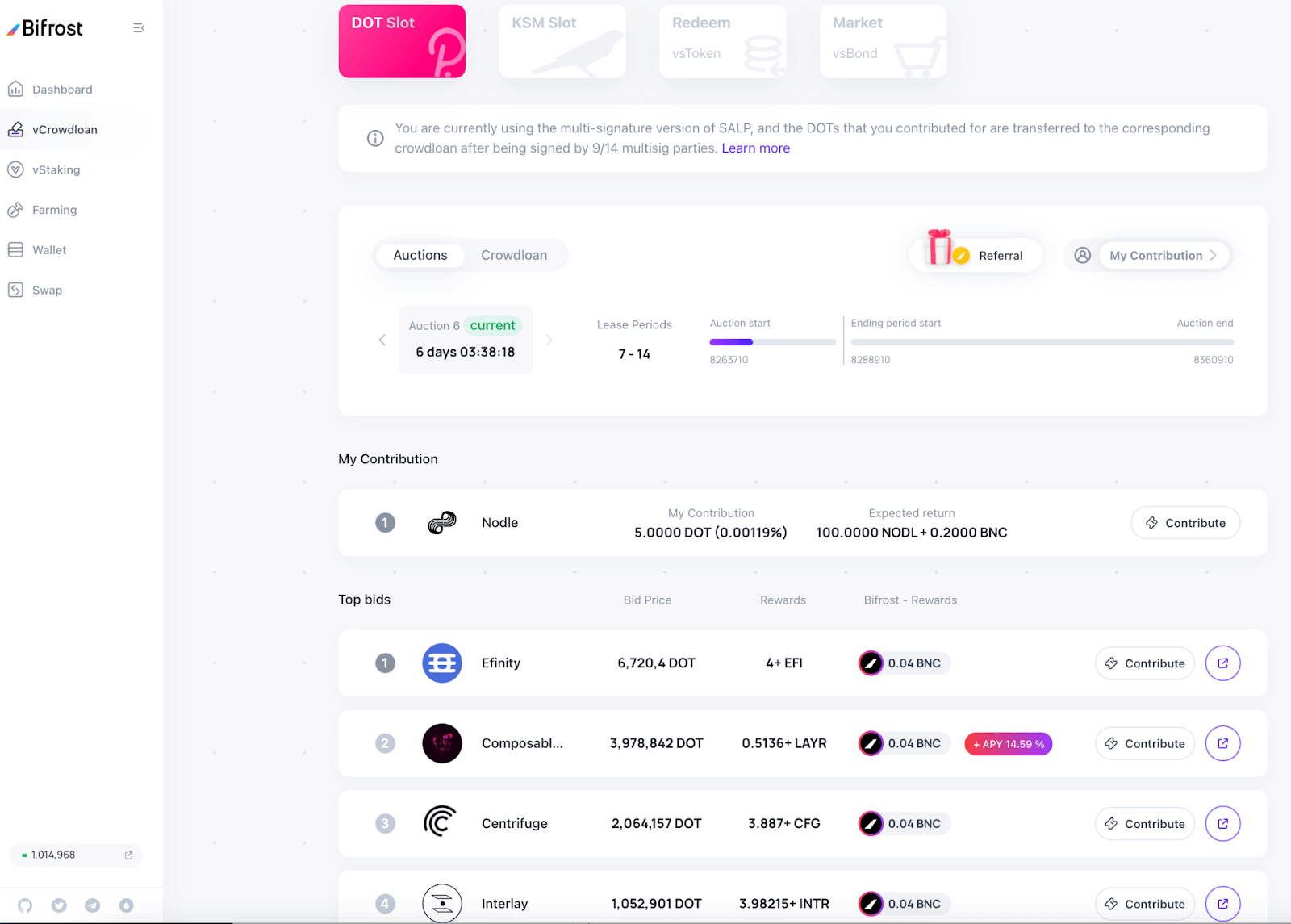 In terms of the specific implementation mechanism, there are different lease periods and rewards in the slot auction process. They will generate many tokens with various equity. The Bifrost solution decouples the token asset attributes from the equity attributes and designs two derivatives: vsToken (Voucher Slot Token) and vsBond (Voucher Slot Bond).

In particular, vsToken (vsDOT/vsKSM) is a fungible token and a pledge credential for the user, representing the user’s asset attribute in the parachain bidding tokens. vsBond is a non-fungible token, which stands for the different equity attributes of the user’s slot leasing cycle and bidding rewards for supporting the parachain.

With such a mechanism, vsDOT/vsKSM can be sold without affecting access to parachain rewards. 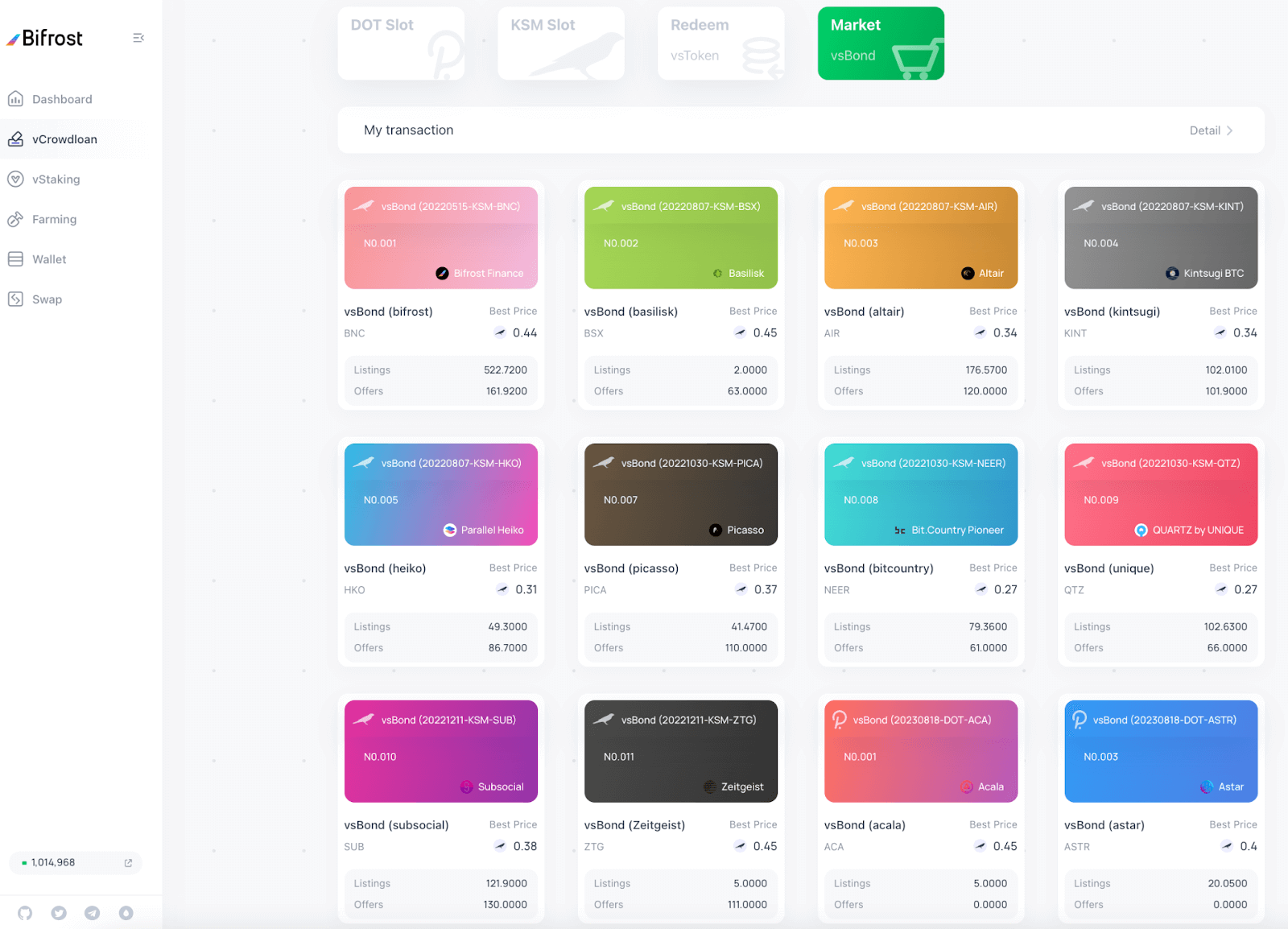 Bifrost has currently minted a total of 170,000 vsKSMs and 1.23 million vsDOTs. With support for ETH 2.0 and liquidity in DEX, the entire Bifrost ecosystem has a total of nearly $150 million in assets locked up.

It is important to note that Bifrost has only one leading network, so the BNC tokens issued now will exist in both Kusama and Polkadot networks. After becoming a parachain on Kusama, the next milestone for Bifrost is to continue to become a parachain on Polkadot.

Parallel Finance is a decentralized cryptocurrency marketplace on the Polkadot and Kusama blockchains. A protocol aimed to bring more liquidity to the Polkadot /Kusama ecosystem. With the growing popularity of DeFi, there is an increasing demand for lending to holders of Polkadot /Kusama assets (e.g., DOT/KSM). Therefore, Parallel Finance is designed to support three main functions: borrowing, lending, and crowdloan.

Like Bifrost, Parallel allows token holders to deposit their assets into Parallel Finance’s account and receive a “voucher” asset, called a c-asset in Parallel, which corresponds to cDOT and cKSM.

Supporting a project through Parallel’s crowdloan feature will result in 3 types of tokens:

There is a lending system in the core module of Parallel, in which users can deposit their cDOT/cKSM assets in their hands to gain additional interest rewards. Moreover, cDOT/cKSM can also be used as collateral to participate in lending. Plus, cDOT is tied to the liquidity of the project tokens in the form of LP, so the derivative assets on Parallel are also equipped with certain liquidity conditions.

The platform has raised 21.34 million DOTs and 57.3 million KSMs, locking in cumulative liquidity of $550 million. Parallel is also one of the five current Polkadot parallel chains.

Parallel has 53,000 Twitter users and 8,000 telegram users, and its tokens for both networks are not in circulation.

The table below compares the development status of the three projects: 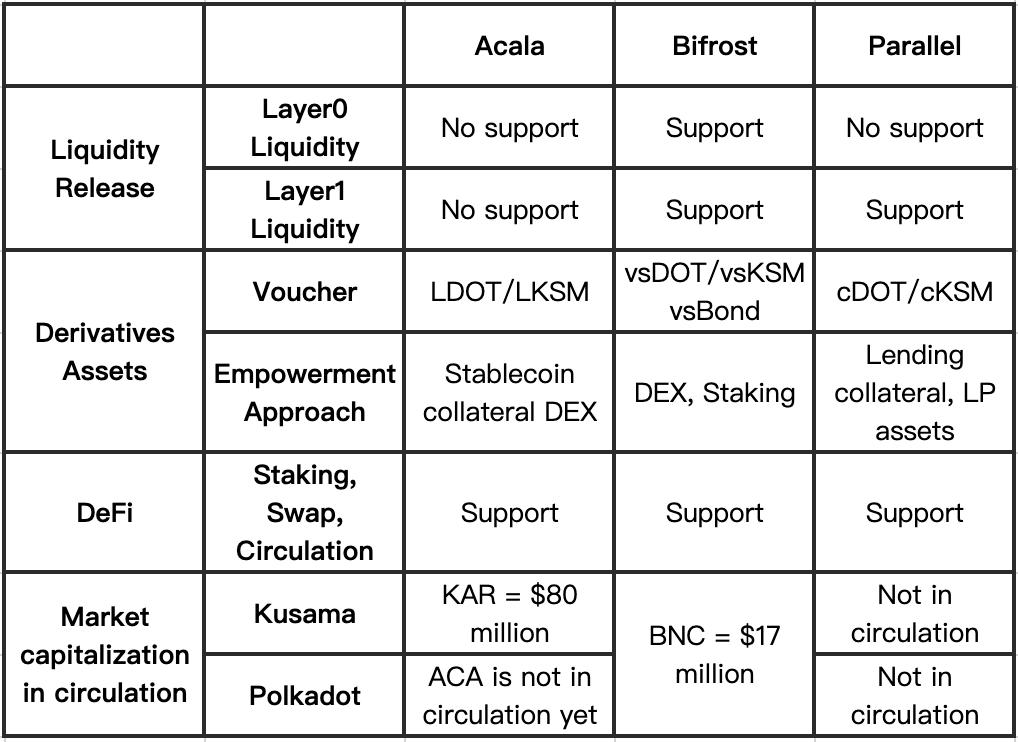 The development of the Polkadot ecosystem remains in its early days. Although there are not as many executable cases as Ethereum and other mainstream public chains, the popularity of DeFi has strengthened users’ liquidity needs for assets.

For Polkadot’s system framework, the liquidity issue is a bit more complicated, as this liquidity is both in the primary chain token pledge process and in the slot auction.

With the constant improvement of the liquidity release protocol and the lowering of the threshold and barriers to participating in the bidding of Polkadot slots, its ecosystem is expected to achieve rapid development. The growing ecosystem will strengthen the lock-up scale of liquidity solutions. If the scale is large enough, a huge network effect can be formed to capture the dividends of the Polkadot ecological development.

Bifrost launches on Kusama-based Karura Swap with 200,000 BNC in rewards

vsKSM (Kusama) farming is live on Bifrost. Here’s how to get started