Jack Dorsey tells Mark Zuckerberg he should have built around Bitcoin 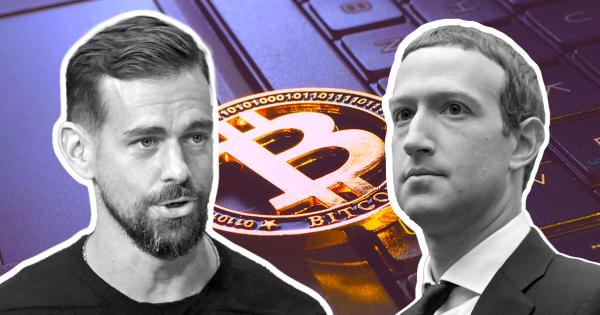 Jack Dorsey, the CEO of Block Inc, formerly Square Inc, tells Mark Zuckerberg he should have focussed his efforts on Bitcoin instead.

Dorsey was referring to Zuckerberg’s failed Diem project, which finally threw the towel in after U.S regulators refused approval.

Diem’s assets were sold to Silvergate Bank earlier this week, marking the end of the project. Silvergate said it plans to utilize the technology and workforce to launch its own stablecoin offering later this year.

Speaking at the MicroStrategy World Conference, Dorsey said Diem was a waste of time and effort. And according to the former Twitter boss, it was all down to one key aspect.

Affiliation with Facebook meant the beleaguered Diem project was off to a poor start from the beginning.

Interest from partners was initially buoyant, with household names including Mastercard, Visa, Stripe, and PayPal signing up for a piece of the action. But things soon turned sour as lawmakers and regulators voiced their concerns.

In most cases, the dominant concerns centered around Facebook leveraging its already considerable influence on global financial markets. And based on the company’s track record with data privacy, this was a step too far for authorities.

After a hearing on the matter, senators banded together in a rare show of cross-party unity to urge Zuckerberg to pull the plug.

“Facebook cannot be trusted to manage a payment system or digital currency when its existing ability to manage risks and keep consumers safe has proven wholly insufficient.”

Fast forward to now, and a press release on Monday confirmed the end by announcing the sale of Diem assets to Silvergate Bank.

Dorsey says open ledgers, like Bitcoin, make all the difference

Assessing the situation, Dorsey implied Diem was always doomed because it focussed on growing a closed-off ecosystem.

“They tried to create a currency that was owned by Facebook — probably for the right reasons, probably for noble reasons — but there were also some reasons that would indicate trying to get more and more people onto the Facebook ecosystem.”

He continued by saying Zuckerberg could have successfully achieved his digital currency ambitions if he had piggybacked off the open Bitcoin network, instead of going the route he did.

“Those two years or three years, or however long it’s been, could have been spent making Bitcoin more accessible for more people around the world, which would also benefit their Messenger product and Instagram and WhatsApp.”

With Meta’s development in full swing, time will tell if Zuckerberg has learned his lesson.