‘I felt like a moron’ for not buying Bitcoin, says billionaire Stanley Druckenmiller

"I just couldn’t stand the fact that it was going up and I didn’t own it," Stanley Druckenmiller confessed in a recent interview. 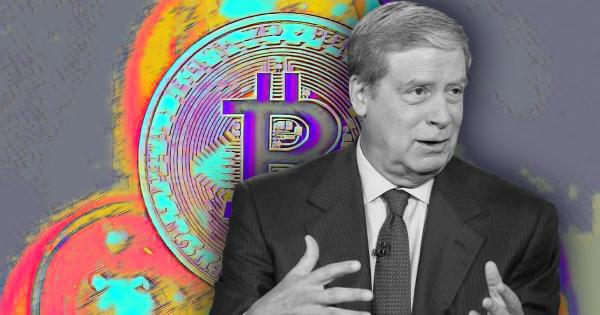 Billionaire investor Stanley Druckenmiller has recently explained why invested only $20 million in Bitcoin (BTC), skeptical of Ethereum (ETH), and prefers to pretend that Dogecoin (DOGE) doesn’t exist at all.

“For the first move in Bitcoin—I think from like $50 to $17,000—I just sat there aghast. And […] I wanted to buy it every day. It was going up and—even though I didn’t think much of it—I just couldn’t stand the fact that it was going up and I didn’t own it,” Druckenmiller said in an interview with The Hustle earlier this week.

A few years ago, Druckenmiller famously said that Bitcoin is a “solution in search of a problem.” Since then, however, he “evolved on this” thanks to a couple of occurrences. First, he finally realized what problem Bitcoin aims to solve—and that problem was called “central banks.”

“I found the problem: When we did the CARES act and Chairman Powell started crossing all sorts of red lines in terms of what the Fed[eral Reserve] would do and wouldn’t do. The problem was Jay Powell and the world’s central bankers going nuts and making fiat money even more questionable than it already has been when I used to own gold,” Druckenmiller explained.

“Well, this was huge in my mind. So here’s something with a finite supply and 86% of the owners are religious zealots. I mean, who the hell holds something through $17,000 to $3000? And it turns out none of them—the 86%— sold it. Add that to this new Central Bank craziness phenomenon,” Druckenmiller noted.

“An old elephant trying to get through a keyhole”

Finally, he decided to buy $100 million worth of Bitcoin at around $6,200—but ran into some issues. However, Druckenmiller didn’t explain what those were.

Ultimately, Druckenmiller took “some costs and then some” out of his Bitcoin investment—but still held on to an undisclosed amount of BTC.

“My heart’s never been in it. I’m a 68-year old dinosaur, but once it started moving and these institutions started upping it, I could see the old elephant trying to get through the keyhole and they can’t fit through in time,” he argued.

Speaking about Ethereum and other cryptos, Druckenmiller argued that it will be “very, very tough to unseat” Bitcoin as the ultimate store of value among assets.

“I think Bitcoin has won the store of value game because it is a brand, it’s been around for 13-14 years, and it has a finite supply. Is it going to be gold? I don’t know. It’s sure as hell doing a good imitation of it the last year or two,” he pointed out.

Meanwhile, Druckenmiller lauded Ethereum’s qualities as a “commerce facilitator” and the leading platform for smart contracts. The billionaire, however, said he’s “a little more skeptical of whether it can hold its position.”

“It reminds me a little of MySpace before Facebook. Or maybe a better analogy is Yahoo before Google came along. Google wasn’t that much faster than Yahoo, but it didn’t need to be. All it needed to be was a little bit faster and the rest is history,” Druckenmiller opined.

Further, he argued that a completely new, better payments system could emerge in the future, and “there’s a chance that it hasn’t even been invented yet.” Meanwhile, Bitcoin will likely continue to be considered a store of value akin to gold.

“As long as Jay Powell keeps acting like he’s been acting, I think gold and Bitcoin—and Bitcoin seems to be high-beta gold—are going to have the wind behind them,” Druckenmiller noted.

Dogecoin, on the other hand, doesn’t elicit any serious thought from Druckenmiller at all. Despite numerous endorsements from billionaires such as Elon Musk or Michael Saylor, DOGE is just a part of “this wave of money in the Greater Fool Theory,” he argued.

“Now having said that, I wouldn’t short it because I don’t like putting campfires out with my face. So I just try and pretend DOGE doesn’t exist. I think so little of it, it doesn’t even bother me when it goes up,” Druckenmiller confessed.

Likewise, he compared Dogecoin to booming non-fungible tokens in the sense that “it’s a manifestation of the craziest monetary policy in history.”

“And I think since there’s no limit on supply, I don’t really see the utility of [Dogecoin] right now. When Bitcoin used to go up, I’d go crazy because I didn’t own it. When Dogecoin goes up, I just start laughing,” said Druckenmiller, concluding, “Don’t go long and don’t go short. I mean, you know, unless you like going to Vegas, then I guess it’s okay.”