Here’s why OpenSea users are buying more NFTs on Polygon

NFT activity on marketplace OpenSea over the Polygon network has soared the past months. As NFT activity shifts to Polygon, users save hundreds of millions in Ethereum gas fees. 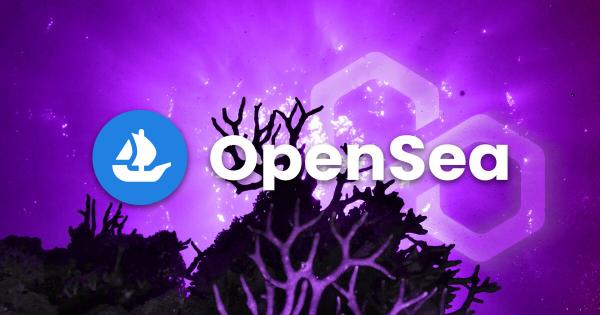 Photo by Nariman Mosharrafa on Unsplash

With global brands consistently dropping their collections, NFT activity on the dominant NFT marketplace OpenSea, using the Polygon sidechain network, has been on the rise for several months, hitting new record highs in January.

Users have been able to trade NFTs on OpenSea over the Polygon network since July 2021, and the option has grown in popularity from the very beginning. Polygon is an Ethereum Virtual Machine compatible sidechain to Ethereum, and by using OpenSea on Polygon, users can save on Ethereum gas fees as well as experience faster transactions.

In a tweet thread, Polygon analyst Simran Gogia says trading volumes on OpenSea over Polygon reached $78.9 million in January with over 102,000 trades per day. According to Gogia, by using Polygon instead of the Ethereum base chain, users saved a total of $195.6 per month, averaging $0.04 per transaction.

On a daily basis, users save in total $7.18 million, or around $70 per transaction, according to Gogia.

People have more NFTs on Polygon

Data derived from Dune Analytics confirms Gogia’s numbers. In January this year, the trading volume over the Polygon network amounted to over $79 million, up almost 4% since December and up 465% since July 2021.

The upside from using the Polygon network is evident by the high number of average NFTs traded by users. On Polygon, OpenSea users have traded 12 NFTs on average, which is 2.7 times more than what users trade on OpenSea using the Layer-1 Ethereum base chain.

“[This is] driven by Polygon’s low-cost environment which further helps in rendering opportunities to new creators too,” Gogia tweets.

The downside of trading NFT over the Polygon network is lack of liquidity – There are simply a lot more potential buyers on Ethereum Layer-1. In fact, looking at data from Dune Analytics, almost $5 billion worth of NFT trades took place on the Ethereum base chain in January this year alone.

However, in January there was actually a slightly higher number of NFTs sold on Polygon than on Ethereum – 2.6 million versus 2.4 million respectively. This speaks to the willingness of users to trade more if they don’t have to spend as much money in gas fees.

New popular NFT drops contributing to high trading volumes on Polygon are parcels of real estate land in “London” and “Tokyo” in the Division Network metaverse, which has so far reached a volume of 290 ETH over the past seven days, and Adidas Originals for Prada re-source with a trading volume of 365 ETH.

“Polygon has established itself in the domain, helping brands across the spectrum in creating and enhancing their asset valuation. With Ryan Watt on board, Polygon is set to challenge and achieve new frontiers,” Gogia tweets.