Censorship resistant Bitcoin steps in where GoFundMe falls apart, demonstrating its utility in times of crisis. 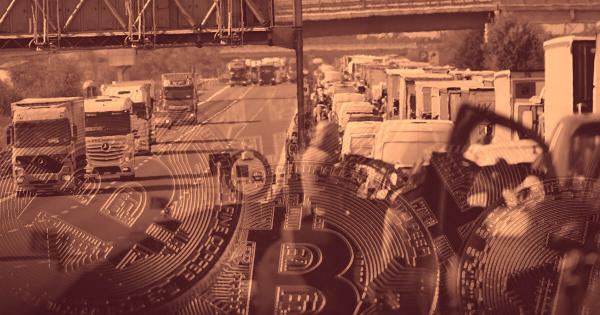 GoFundMe’s poor treatment of Canadian truckers, and their donors, has Bitcoin poised and ready to plug the gap.

GoFundMe accused of fraud and deception

In a show of (true) democracy and free speech, Canadian truckers took it upon themselves to protest against vaccine passports and mandates.

What was initially termed a “fringe minority” of people who hold “unacceptable views” ballooned into a 70-kilometer convoy? Benjamin Dichter, a spokesman for the truckers, said an estimated 35,000 to 50,000 trucks are participating in the demonstration.

The convoy hit Canada’s capital, Ottawa, on January 29, where the truckers set up shop, paralyzing the center by blocking roads.

During this time, mainstream media has reported incidents of hate and violence from the protestors. A claim dubbed “gaslighting authoritarianism” by liberal author James Melville.

Based on these reports and at the behest of local law enforcement, GoFundMe froze the campaign’s funds, which came in at over CAD$10,000,000 (US$7.9 million) at the time.

“On Friday, the crowdfunding platform GoFundMe froze the convoy’s official campaign, claiming law enforcement convinced the company that the convoy had become violent and unlawful.”

In a further blow, GoFundMe decided not to process automatic refunds. Instead, the popular crowdfunding platform said donors would need to submit a form to get their money back.

They later withdrew this requirement, saying they will now return the money automatically.

However, Texas Attorney General Ken Paxton said via social media that he had assembled a team to investigate GoFundMe on fraud and deception charges.

Nonetheless, the damage to GoFundMe’s reputation has already been done, and once again, the susceptibility of centralized platforms is shown for the whole world to see.

Bitcoin to the rescue

With no way to access funds to keep the protest alive, shrewd Canadians have turned to Bitcoin via Tallycoin.

“Tallycoin is a crowdfunding platform built on top of the Bitcoin blockchain.”

The platform says it takes no cut from donations and its companion node software means campaigns receive all the donations directly to their own dedicated node.

By cutting out the middleman, in favor of peer-to-peer transactions, both on-chain and via the Lightning Network, the truckers can access funding without fear of authorities stepping in.

The truckers are currently deciding how best to spend the money. The word is fuel and food are the top priorities at the present time.

According to Bitcoin Magazine, so far, donors have raised 6.37 $BTC ($272,000 at the current price) since Tallycoin took over the campaign’s funding from GoFundMe.

A look at the Tallycoin website shows that figure has since increased to 8.8 $BTC, thanks to over 3,900 donors, making it the number one campaign on the platform.