Former congressman Ron Paul shared his concerns on the government’s intervention on crypto. 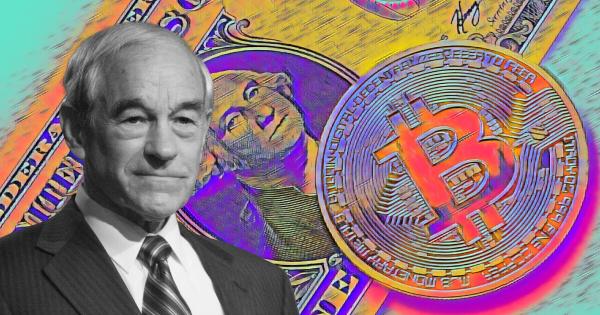 Ron Paul, former 12-term US Congressman from Texas, warned about the intricacies of the current inflation and the government’s crackdown on crypto in an interview for Kitco News.

The former presidential candidate argued his case for the legalization of Bitcoin (BTC), advocating free market and competition, as he warned about the consequences of Federal Reserve (Fed) policies.

It’s a form of money, let it compete with the dollar

Corona-charged inflation due to unchecked money printing from the Fed is going to be detrimental for the economy, according to Paul. He pointed out that governments have controlled the money for centuries and are not going to give it up, adding that “one of the most appealing aspects of crypto is the absence of government and central banking.”

The debasement of the dollar caused rising interest in Bitcoin as a safe-haven asset, but Paul is particularly concerned about that. According to him, “the dollar will stick around, but won’t be worth much,” leading to the government’s crackdown on cryptocurrency.

He applied the same concern to Bitcoin as to gold, referring to Roosevelt’s move from 1933, which imposed limitations on gold ownership in the US under the pretense that the depression caused “hoarding” of gold and was stalling economic growth.

The order was repealed during the Ford administration 40 years later and Paul is warning something similar could happen again.

“Our problem isn’t the technicalities of gold standard or crypto, our problem is the dependency on government and less concern about personal liberty,”  he said, adding we should concentrate on property and contract rights.

Nothing is certain except death and taxes

Paul is predicting the government will become increasingly aggressive as Bitcoin gets more successful. One of the simplest ways to fund the Fed is through tax regulations.

“Right now, if you buy and sell gold, you get it taxed, they can do that. If you make a profit in Bitcoin, you read stories about people being taxed on it, he said, adding:

“You can’t tax money, you don’t tax it. If you bought a dollar a year ago and it went down 10%, you can’t take a loss because your dollar lost value.”

The Securities and Exchange Commission (SEC) tackles the market through lawsuits as the government keeps insisting crypto is taxable because the IRS identifies it as property, not currency.