After months of rumors, Solana NFTs will be coming to OpenSea Oluwapelumi Adejumo · 3 months ago · 2 min read
Solana › NFTs

After months of rumors, Solana NFTs will be coming to OpenSea

The increased competition within the NFT marketplace left OpenSea with no choice than to integrate Solana NFTs to its platform. 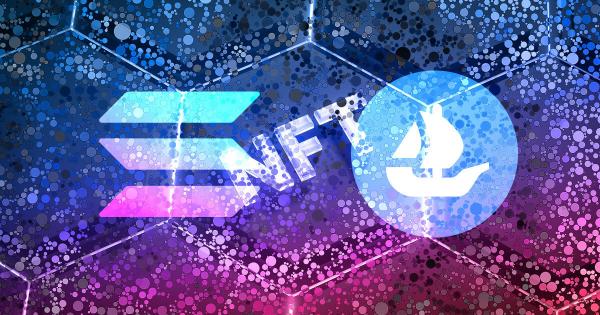 OpenSea has finally confirmed that it will add Solana NFTs to its platform. The confirmation came in the form of a teaser video posted on the official Twitter account of the NFT marketplace.

The video showed several community requests for Solana NFTs and was captioned “The best-kept secret in web3.”

But the secret isn’t so well kept, given that we reported about the possible integration as far back as January. OpenSea, at the time, failed to confirm the story saying that it would only comment when it had information for its community.

While the marketplace did not release a specific date for the integration, there are speculations that the Solana feature could be available as early as April.

Adding support for Solana will make the network the third layer-1 blockchain on OpenSea. The others are Ethereum, Klatyn, and Layer-2 network Polygon.

Why OpenSea had to support Solana NFTs

The decision to add Solana isn’t entirely surprising considering its position within the NFT space. Solana is second to Ethereum in terms of all-time NFT sales, with a market cap of $1.5 billion for all of its collections.

The Solana NFT space has grown significantly since last summer, with some popular NFT collections like Degenerate Ape Academy, Aurory, and Solana Monkey Business being built on the network.

Aside from that, the current fact that the Solana network offers a cheaper and faster transaction alternative to Ethereum has made it one of the biggest rivals of the second largest crypto asset by market cap.

For OpenSea, the move is coming at the right time because more competitors are beginning to emerge within the space. The highly anticipated Coinbase NFT marketplace, alongside the FTX marketplace, has taken the focus away from OpenSea.

Also, OpenSea’s current litany of exploits has raised questions about if the marketplace is safe for users. So, supporting a new blockchain could help the network cement its position as a market leader in the NFT space.

On the other hand, the leading marketplace for Solana NFTs, Magic Eden, which accounted for 80% of Solana NFT sales in the past month, would face new competition from a more established rival.

This means that Magic Eden could lose its domination of the Solana NFT space to OpenSea, considering the stature of the new entrant. However, Magic Eden appears to be relishing the competition for the soul of the space considering its 2% transaction fee is 50 basis points lower than that of OpenSea.