The EU says its sanctions will potentially weaken Russia's industrial capacity to continue its war in Ukraine. 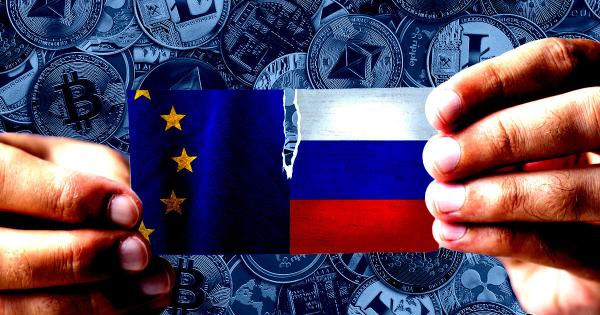 The European Union (EU) commission has imposed a new wave of sanctions on Russia over its invasion of Ukraine, according to an Oct. 6 press statement.

“(All) existing prohibitions on crypto assets have been tightened by banning all crypto-asset wallets, accounts, or custody services, irrespective of the amount of the wallet (previously up to €10,000 was allowed).”

The new sanctions are the eighth set of measures imposed by the union to cut Russia’s economic growth and military success. According to the commission, the sanctions are “proof of its determination to stop Putin’s war machine and respond to his latest escalation with fake ‘referenda’ and illegal annexation of Ukrainian territories.”

The EU’s sanctions also extend to the scope of services that can no longer be provided to the government of Russia or its citizens within the country. These services include IT consultancy, legal advisory, architecture, and engineering services.

The sanctions also place €7 billion in import restrictions on Russian products like vehicles, steel, ceramics, etc. Also, it was revealed that the  G7 agreement on Russian oil exports would be implemented starting Oct. 6.

According to the commission, its previous sanctions against the Putin-led country had proven effective. The sanctions have damaged Russia’s ability to manufacture new weapons and repair existing ones and hindered its material transportation.

Several reports revealed that the Russian authorities are increasingly leaning towards using crypto for international payments. Russia’s Prime Minister Mikhail Mishustin had stated that the country’s financial system might have to adjust to the new economic reality.

Meanwhile, crypto use remains hazy in Russia. President Putin signed a law on July 14 that banned using cryptocurrencies as a local means of payment. Apart from that, the country blocked global crypto exchange company OKX on Oct. 4 without giving any reason.