Ethereum, XRP, and Litecoin could be bound for a steeper decline

Ethereum, XRP, and Litecoin appear to have reached an exhaustion point following the uptrend they entered since the beginning of the year. 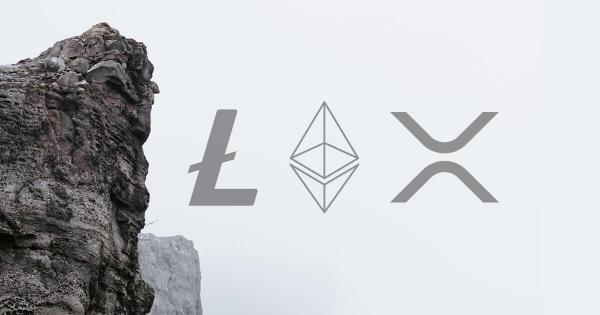 Ethereum, XRP, and Litecoin appear to have reached an exhaustion point following the uptrend they entered since the beginning of the year. Now, a technical index estimates that these cryptocurrencies could be bound for a correction before the continuation of the bullish trend.

Ethereum is about to pull back

Ethereum went through rally that saw its price surge over 40 percent since Jan. 3. This cryptocurrency went from trading at a low of $126 to a high of $179 on Jan. 18. Despite the recent bullish impulse, ETH seems to be preparing for a pullback at the moment.

The TD sequential indicator is currently presenting a sell signal in the form of a green nine candlestick on ETH’s 3-day chart. This technical index estimates that Ethereum could retrace for one to four candlesticks or begin a new downward countdown. A red two candlestick trading below a preceding red one candle could validate the bearish formation.

Although a correction seems imminent, Ethereum is contained within a reasonable no-trade zone. This area is defined by the 50 and 100-three-day moving averages, which are serving as support and resistance, respectively.

Closing below the support level could validate the bearish signal presented by the TD sequential indicator triggering a steep correction. Meanwhile, a spike in the buying pressure behind this cryptocurrency that allows it to break above resistance could take it to the 150-three-day moving average, at $195.

Now, the 30 and 50-day moving averages are also about to form another golden cross.  Many investors see this technical pattern as one of the most definitive and robust buy signals that could start a prolonged uptrend.

Even though the moving averages crossover estimates higher highs for XRP, the TD sequential indicator is presenting a sell signal. The bearish formation was given in the form of a red nine candlestick, which could push the price of this crypto down for one to four candlesticks.

Due to the ambiguity about the future market valuation of XRP, the Fibonacci retracement indicator can be used to determine where this cryptocurrency could be heading next.

Litecoin is slowing down

Despite the bullish outlook presented by the golden cross, the TD sequential indicator is currently forecasting a pullback. This technical index is giving a sell signal on LTC’s 3-day chart. The bearish pattern stipulates that Litecoin would likely correct for one to four candlesticks before a possible continuation of the uptrend. A red two candlestick trading underneath a preceding red one candle could confirm the downward momentum.

Nevertheless, an increase in volume that pushes Litecoin above the recent high of $63 could jeopardize the pessimistic perspective. Such an upswing may take LTC to a new yearly high of $70 or $74.

Over $56 billion were injected into the cryptocurrency market since Jan. 3. The sudden inflow of capital allowed many cryptos to surge exponentially, including Ethereum, XRP, and Litecoin.

Now, investors seem to be taking profits from the recent rally, which could trigger a retracement. A pullback from the current price level would allow sideliners to re-enter the market. A new wave of fresh capital could push the price of these cryptocurrencies into higher highs.

The idea of a further advance aligns with the CEO of Bitcoin Suisse Arthur Vayloyan’s 2020 outlook. Vayloyan maintains that Bitcoin and other digital assets “will go up” throughout the year as the network continues expanding, and more investors join the space.

Bitcoin (BTC) appears to be the best performing major asset in the world so far in the new decade, as it has been able to post a massive climb from its recent low of $6,800 that was set in the early part of Jan 2020. 2 min read

It has grown increasingly unclear in recent times as to whether or not the aftermath of the recent uptrend seen by Bitcoin and major altcoins like Ethereum (ETH) marks any type of fundamental shift in market structure, or if it is simply another lower-high that will be followed by further losses. 2 min read

The crypto market’s firm uptrend has allowed multiple major altcoins to begin going parabolic, which to many investors is emblematic of the early stages of the massive bull run seen in late 2017. 2 min read