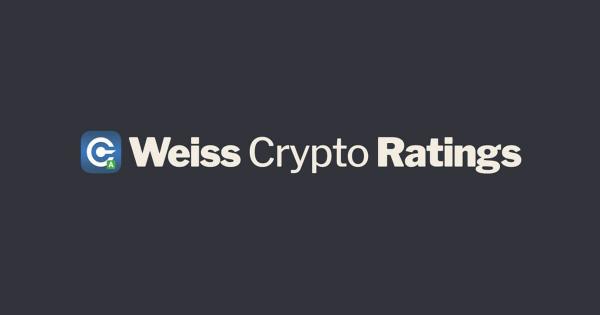 Photo by Sofia Baboolal on Unsplash

Weiss Ratings is the nation’s leading independent rating agency and has been grading financial institutions since 1971. Currently, Weiss Ratings assigns letter grades to nearly 55,000 investments and institutions such as stocks, mutual funds, ETFs, insurance companies, and banks. The company made the pivot to cryptocurrencies back in January 2018.

The ratings given to these cryptocurrencies are based on an average of two different grades that are given based on the project’s investment risk/reward grade and technology/adoption grade.

“The overall Weiss Rating is based on a complex algorithm — not simply an average of the two component grades. At this stage in the industry’s transition to newer technologies, it remains extremely difficult for any one coin to achieve top scores across the board. Older generation coins with broader adoption typically lag in technology. Alternative coins with more advanced technology lag in adoption. And none currently have a risk-reward balance that’s comparable to many traditional investments.”

The company states their overall goal is to help the public avoid the ‘hype and fear’ and to invest with more confidence and awareness of potential dangers.

Investors should interpret Weiss’ grading scale with these terms:

The plus or minus in a grade indicated the lower or upper third of a grade range. The F grade is assigned to cryptocurrencies that have had credible allegations of fraud.

No cryptocurrencies on the list received an A or B+ rating, but 14 received a B or a B-. At its launch, Bitcoin held a C+ rating but has since been moved up to an overall rating of a B-.

#Bitcoin (B-) started everything. #Ethereum (B-) expanded use cases with its smart contracts. Now, #EOS (B) will make it all actually work. But never forget: Like all crypto, it’s still experimental. #crypto #cryptocurrency #btc #eth #altcoin #altcoins

EOS, Cardano (ADA), and Decred (DCR) were given the top ratings of the list with the ratings of a B.

The lowest scoring cryptocurrencies (with a market cap of minimum $100 million) include:

Reddcoin was once endorsed by the infamous John McAfee, but the software company founder’s allegiances to specific projects seem to change often.

Bitcoin Gold is another hard fork from Bitcoin that focuses on mining, and Electroneum is a cryptocurrency that is designed to be used and mined via a mobile device.

You can access the Weiss Ratings PDF for free via the company’s website up until June 4th.

Weiss’s cryptocurrency ratings change more frequently than that of stocks, bonds, or businesses. If you are using this tool, it is important to check back due to frequent downgrades and upgrades.