Edward Snowden, Gavin Wood, David Chaum, and Raullen Chai agreed that technology in the wrong hands, such as governments, centralized entities such as large corporations, or Big Tech, pose risk to society. 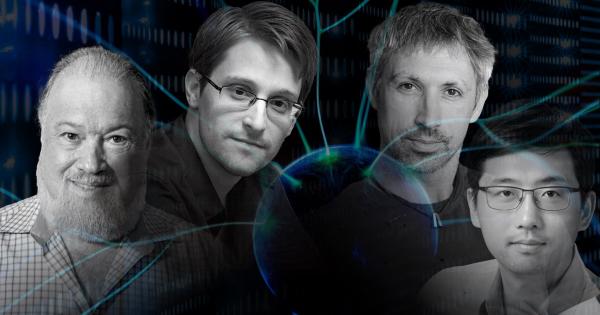 Photo by Moritz Kindler on Unsplash

After 9/11, “the US government for the first time was able to take control of an infrastructure that had already begun to work its way into every home, every workplace and now, every pocket,” said Snowden, referring to smartphones.

Snowden said this new form of authoritarianism and form of oppression began taking place because of 9/11 and thanks to technology.

“Covid-19 has killed far more people then 9/11 terrorist attacks, however that act changed US national policy (toward the rest of the world) for two decades in very harmful way. We went to wars that we could never extricate ourselves from, and most importantly, we reinterpreted the Constitution of the United States, what all of our laws meant, in secret,” he said.

The US took advantage of the technology upon which smartphones were built, he explained. That technology “is what really changed, I think, in a historic way” as the “United States operated in secret with first mover advantage,” Snowden said.

He explained that the US then operated in concert and conspiracy with its five Anglophone allies, United Kingdom, Australia, New Zealand, Canada to “basically try to establish what they would describe as information dominance on the internet.”

Snowden, a former NSA intelligence analyst turned whistleblower, described how invasive their control became as they were able to spy on anybody worldwide by simply entering their email or IP address into surveillance software. And this is what gave birth to what was in 2013 described as global mass surveillance.”

Snowden said Facebook, Amazon, Apple, spy on people, listen in and control and influence our lives with information and advertising knowing that today’s generations mostly only read headlines.

Gavin Wood, and his unique perspective

Gavin Wood, co-founder of Polkadot and Chairman of Parity Technologies, participated in a video-panel discussion with Edward Snowden. In it, Wood, an Ethereum co-founder, gave his very particular viewpoint with his unique form of expression, which comes with his more calculated and mathematical perspective.

The minute cryptocurrencies stop being decentralized, “they will cease to have this value proposition that bitcoin had, and they will become just like another form of centralized service, not entirely different to Amazon, Google, Facebook.”

Wood is credited with coining the term Web3, which he predicted will be “a very interesting social experiment. “We’re gonna see just how much the world cares about privacy, self-sovereignty and transparency, knowing that the rules–the assumptions about how a system or service works–are true.”

Wood, also an Ethereum co-founder, said that looking ahead, in about ten to 20 years, “I hope the “massively multi-user application framework –global services that we broadly refer to as the Web’–will provide us with ‘de facto’ guarantees.Hard guarantees on the rules that are open and transparent–that we can read, whether it’s in code, whether it’s in English–and a credible belief that they will be followed is what was missing in the pre-blockchain, pre-peer-to-peer world.”

David Chaum, a computer scientist, cryptographer, and pioneer in privacy-preserving technologies, took the virtual stage at the BlockDown as well. He too expressed his opposition to centralized entities, including governments, banks, and social networks because they collect people’s data and use it to their advantage.

“I know that if I lose access to my Bank of America account, I just call someone on the phone and they can reset my password if they verify my identity. This is because banks own their customer data and, by having it, they have power over their accounts. Access to personal data has also become natural on social networks, such as Facebook,” Chaum pointed out.

Chaum also made his position against the centralization of money and cryptocurrencies, including bitcoin, very clear. “Decentralization is the opposite of centralization, that is, central control of social rules, economic activity, and information,” said Chaum before deploring  that we live in a society that “forces us to operate in a centralized system, where we have no control or privacy of our information.”

Raullen Chai: the risks of centralization in the new machine economy

Dr. Raullen Chai, a highly-regarded scientist, cryptographer, and co-founder of IoTeX, spoke separately about his blockchain project but described a similarly frightening scenario.

Dr. Chai was speaking of the genesis of a new machine economy that in the future will enable people to take back control of their privacy, data, smart devices and the value they generate. However, he said it “still does not work that way, unfortunately.”

“Right now, machines are powered by centralized entities, cloud computing and manufacturers,” he said. “This is not the right path for us. Centralization leads to monopolization of the current and future workforce. This is scary and represents huge risks for humanity.”

The cybersecurity expert and former computing engineer at Google and Uber explained that “for instance, if Tesla were to own all the autonomous cars worldwide it would be really easy for Big Brother (central authorities) to eliminate anybody at any given time by only pushing a button.”

Chai said “smart and automated machines should not be owned or controlled by centralized entities” and said this is why IoTeX’s mission is to power billions of machines at scale but for the benefit of the people.”

Web3 brings many promises, from privacy to empowerment of the people over central authorities and entities. Today, those centralized authorities wield that power to exert greater control and influence over the masses. They also profit and benefit from their unethical use of our data and our smart devices and the value they generate.