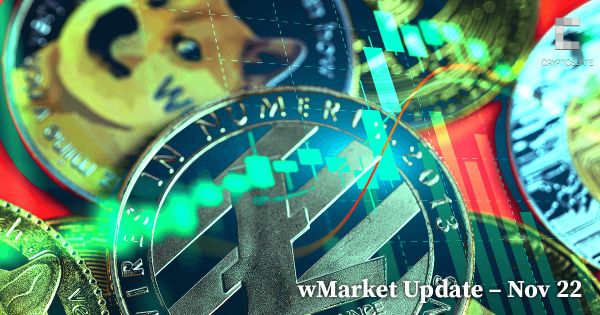 The cryptocurrency market cap saw net inflows of $47.8 billion over the last 24 hours and currently stands at $829.3 billion, up 6.1% over the reporting period.

All of the top 10 cryptocurrencies posted gains over the reporting period. Litecoin re-entered the chart with a 27% increase in value, passing Shiba Inu and ousting TRON from the list. Meanwhile, XRP brings up the rear with 4.4% gains.

The leading cryptocurrency edged upward over the past day. A decisive move higher at 21:00 (ET) on Tuesday saw a continuation of buying pressure that peaked at $16,670 around 06:00 today. The bullish price action brings welcome relief to the events of recent weeks, but some analysts ring caution to this being a dead cat bounce.

TIME is the day’s biggest gainer, growing 77.8% as of press time to trade at $136.605. It is unclear why the employment protocol spiked. However, recent price performance has been strong, with the token gaining 155% over the past week. Its market cap stood at $97.01 million.

LTC increased by 27.4% to $78.9072 over the reporting period. This is due to the market seeking stability amid contagion fears. Its market cap stood at $5.65 billion.

Cyber Dragon is a Play to Earn Game based on Binance Smart Chain. Learn More