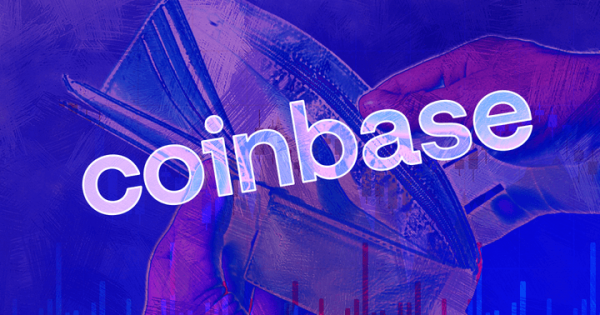 It showed net revenue down 53% from the previous quarter, to $1.165 billion, and a net loss of $430 million. Mizuho Analyst Dan Dolev attributed this to falling trading volume due to the early arrival of crypto winter.

“Crypto winter has come early, and temperatures are dropping fast.”

Shares in the largest US exchange dropped 44% on the day as investors came to terms with the worse than expected performance.

Coinbase made its Nasdaq debut in April 2021. Its mainstream TradFi arrival was supposed to herald a new era, achieving a first-day closing price of $328.28. But more than a year later, $COIN is trading 78% down from its debut closing price.

What’s more, some investors were surprised to discover a bankruptcy disclosure statement in the report. It states customers could be treated as unsecured creditors, meaning they may not get their funds back should the firm go bust.

What’s this about bankruptcy?

Crypto Underwriter at Relm Insurance, Sophia Zaller, drew attention to the bankruptcy disclosure, calling it a red flag. She signed off the tweet warning Coinbase users to move their funds off the exchange.

The specific wording said customers’ funds might be thought of as the property of a bankrupt estate. Should the firm go bankrupt, those funds could be subject to bankruptcy proceedings and, therefore, this may classify customers as unsecured creditors.

In the event of a firm going bankrupt, entities owed money are paid in a particular order per Section 507 of the Bankruptcy Code. First in line are secured creditors, next are unsecured creditors, and stockholders are last.

Is Coinbase too big to fail?

Last crypto winter was characterized by a plethora of crypto firms going bust under the harsh trading conditions.

The most prominent example was Coinnest, which was South Korea’s third-largest exchange. Coinnest issued a statement that said its closure was the natural result of the drop-off in trading volume.

With Coinbase’s trading volume down 40% in the first quarter, the warning signs are there. But then again, is Coinbase too big to fail?