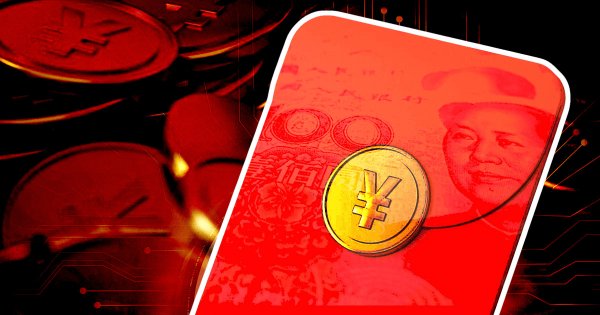 Red packets are popular in Chinese tradition to send monetary gifts in red envelopes during special occasions, most notable during the Chinese new year. The e-CNY is China’s attempt at creating a central bank digital currency.

Guangzhou’s Nansha District revealed that it would disburse 10 million yuan in red packets to the catering and retail industries to boost consumption and stabilize the economy. Per a statement released by the authorities, the District’s Commerce Bureau would be responsible for the disbursement.

According to a report, Shenzhen is planning to issue 30 million yuan digital red envelopes through a lottery system that would allow residents to win up to 128 yuan red packets.

Another report from local media shows that Xiong’an New Area has the same plans of rebuilding and boosting its economy by distributing 50 million yuan to consumers in the area.

A newly introduced Bill to the U.S. Senate by senators Tom Cotton, Mike Braun, and Marco Rubio is looking to ban the use of the digital yuan by U.S. app stores.

According to Senator Cotton, the Bill is necessary because:

“The Chinese Communist Party will use its digital currency to control and spy on anyone who uses it. We can’t give China that chance — the United States should reject China’s attempt to undermine our economy at its most basic level.”

The sentiment was corroborated by Senator Rubio, who said:

(Digital Yuan) is a major financial and surveillance risk that the United States cannot afford to make.

Going by the wordings of the bill, this means that popular mobile app stores like Google’s Play Store and Apple’s App Store would have to block apps like WeChat and others as they support Digital Yuan payments via their platform.

According to a Reuters report, the Chinese embassy in Washington commented on the bill, saying:

“Another example of the United States wantonly bullying foreign companies by abusing state power on the untenable ground of national security.”