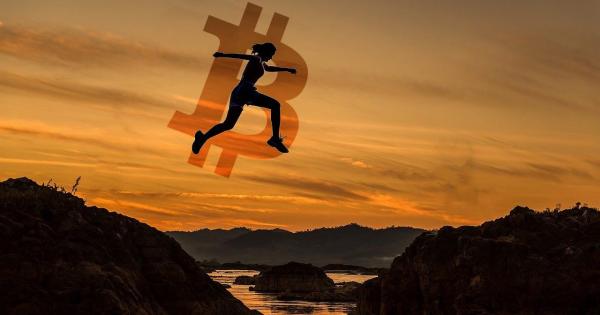 Bitcoin appreciated by nearly $1,700 in the last 40 hours while most financial markets around the world continue to tumble.

The flagship cryptocurrency stole the spotlight after surging over 30 percent. Bitcoin went from trading at a low of $5,260 to hit a high of $6,930.

The sudden price move appears to be correlated to a massive increase in trading volume reported by different exchanges in the industry. Data from CoinMarketCap reveals that the total reported exchange volume rose to more than $56.4 billion while its ratio against on-chain volume skyrocketed over 7x.

From a technical perspective, Bitcoin broke out of a symmetrical triangle where it was contained over the past week. This technical formation is indicative of a consolidation period before the price is forced to break out in a positive direction.

Moving above the upper trendline was seen as the beginning of a new uptrend which appears to have encouraged investors to get back into the market.

A further increase in the buying pressure behind BTC from the current levels could send its price up another 10 percent to hit a target of $7,600. This target is determined by measuring the distance between the highest and lowest point of the triangle and adding it to the breakout point.

If Bitcoin is able to slice through this important supply barrier, it would likely rise to $7,600 or higher.

A further continuation of the bullish momentum would make the pioneer cryptocurrency look like gold did during the global financial crisis of 2008, according to Skew. During that time, gold as well as traditional markets plummeted in tandem before the precious metal decoupled.

The cryptocurrency data analytics firm believes that the amount of incoming fiscal and monetary stimulus could push Bitcoin out of the bearish trend it entered in mid-February. This could make Bitcoin’s appeal as a safe haven and deflationary asset more apparent, said Catherine Coley, CEO of Binance.US.

The “deviation” from traditional markets could represent another “win” for Bitcoin, which prides itself on its “non-correlated and asymmetric performance,” according to Denis Vinokourov, head of research at Bequant.

Although it remains to be seen whether the flagship cryptocurrency continues decoupling from the global economies, Wall Street trader and VP at JP Morgan Chase Tone Vays maintains that this could be the opportunity that sidelined investors have been waiting for.

Vays explained that under the current market conditions he would rather have long positions opened than short.

Cryptocurrency investors have had their perspective and outlook on Bitcoin drastically changed by its recent price action, with its close correlation to the global markets nullifying its status as a safe haven asset and seeming to confirm that it is a risk-on asset.