Bitcoin miners sell during the downturn, what does this mean? Samuel Wan · 3 weeks ago · 2 min read
News › Bitcoin › Mining

Bitcoin miners sell during the downturn, what does this mean?

In an unusual move, Bitcoin miners are selling their holdings before the downturn has fully passed, which means miners expect BTC to decline further. 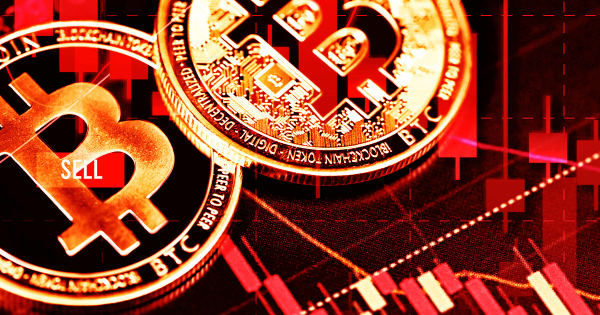 Against the backdrop of fiscal tightening and slowing growth in the crypto industry, Bitcoin miners are selling their holdings. Crypto YouTuber Lark Davies commented that this has been happening since the start of the crypto crash.

Usually, miners hold on to tokens during downturns and sell them once the downturn has passed. That way, miners can maximize their gains.

But selling in a downturn suggests miners expect the price of Bitcoin to fall further.

Davies posted a Glassnode chart of the Bitcoin miner’s net change position, which refers to the 30-day rate of change in miners’ unspent supply, meaning the change in supply held in miners’ addresses.

The most recent activity shows a sharp decrease in miner distribution over the last few weeks ranging from -5,000 BTC/mth and peaking at -8,000 BTC/mth.

The numbers have since lessened to show a current net change position of -3,300 BTC/mth, suggesting the trend may revert to favorable distribution in the coming weeks.

The previous instance of a negative net position change of this significance occurred from January 2021 to April 2021. This period hit a peak of -26,000 BTC/mth.

Between January 2021 and mid-April 2021, Bitcoin rallied hard to hit a new all-time high of $65,000. This period was characterized by joyful disbelief and red hot overbought readings per the Relative Strength Index (RSI) indicator.

Typically, miners sell Bitcoin in periods of strength, as played out between January and April 2021, and hold on to tokens when the market is down.

However, the recent negative net position change shows an inverse behavior against expectation.

What could this mean?

Rather than definitive confirmation of miner pessimism, Will Foxley, a director at Compass Mining, said the move is simply a cautionary reaction to the macro environment. He added that selling Bitcoin now is a prudent move to keep mining operations ticking over during the uncertainty.

“I think miners are just talking about the macro environment and think it is probably prudent to sell Bitcoin in these levels in order to keep the operations safe.”

The outcome will keep sell pressure on the leading cryptocurrency until miners feel sufficiently liquid to keep their operations going.

Meanwhile, Bitcoin broke its weekly downtrend of nine consecutive weekly closes in the red. Although it’s too soon to call a bottom, especially against macroeconomic uncertainty, the news is still a welcome relief for investors.

Lark Davis is a Bitcoin and cryptocurrency investor, who makes daily videos on his YouTube channel to help the average investor make money in this fast-moving market. Learn More