Bitcoin down 50% amid fear of Fed’s hawkish rate hikes

The bitcoin price hasn't been this low since July 2021. Bitcoin is down 50 percent from the November all-time-high, making this the second deepest drawdown in this halving cycle. 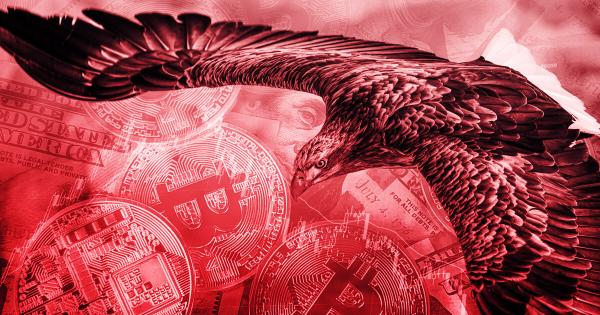 This year has been nothing short of a blood bath for bitcoin. The market has not seen a bitcoin (BTC) price this low since July last year. Corrections in 2017, and early 2021 were much shallower – between 20 and 40 percent, whilst July 2021 reached a drawdown of about 54 percent, according to fresh data out of Glassnode.

According to market analysts, there are two main reasons behind the latest draw-down, the most important being hawkish signals from the U.S. Federal Reserve ushering in several increases to the U.S. interest rate. While the Fed warned of three possible rate hikes during 2022, a Goldman Sachs report predicted a faster pace of Fed tightening if inflation continues to rise. The inflation rate in the U.S. was at seven percent year-over-year in December, a rate not seen since the early 1980s.

Heightened geopolitical tensions between the U.S. and Russia

The second reason for bitcoin price drop, adding to bearish pressures around risk assets in general, seems to be the heightened geopolitical tensions between the U.S. and Russia around the situation in Ukraine.

“We see a risk that the [Federal Open Market Committee] will want to take some tightening action at every meeting until the inflation picture changes,” Goldman economist David Mericle noted in Saturday’s client note, according to CNBC.

Goldman Sachs is expecting four rate hikes this year, each of them raising the interest by 0.25 percentage points, leaving the interest rate at 1.25 percent at the end of the year. However, so-called Fed fund futures are priced for nearly five rate increases. The first increased borrowing rate is coming in March, according to most commentators.

Fed’s next policy meeting, due on Tuesday, will be an important indicator as to where the Fed is heading. The announcement from the meeting will be published on Wednesday at 19:00 UTC.

According to the data site Coinglass, the latest series of drawdowns have had a severe effect on investors and traders. Due to margin calls, more than $1.5 billion of bitcoin trading positions were liquidated over the past three days.

The hawkish signals from the Fed are stirring fear among crypto traders that the Fed will compensate over the coming year for the lax monetary policy that has been prevalent over the past two years of the Covid pandemic. It is widely understood that the increase in bitcoin’s price over the two years of the pandemic comes in large from the Fed’s stimulus packages, including trillions of dollars of money printing.

“One of the bullish drivers for crypto over the last two years has been the surplus of pandemic-related fiscal and monetary stimulus globally, and much of that is coming to an end,” David Duong, head of institutional research at cryptocurrency exchange Coinbase, wrote in a report on Sunday.

The reason why Fed’s change in policy is bearish for cryptocurrencies is that while interest rates are low and inflation is high, investors tend to move further out the risk curve to seek yields. If the Fed is tightening its policy in order to lower inflation by raising the interest rate, investors tend to go in the opposite direction, de-risking risk-on assets such as equities and crypto, and investing in sovereign bonds that are now yielding better due to increased interest rates.