Despite acquiring over 26,000 BTC over the last 30 days, Terra’s strategy to back UST with bitcoin couldn’t counterweight market sentiments over the U.S. Fed’s hawkish policy of hiking interest rates by 50 basis points. 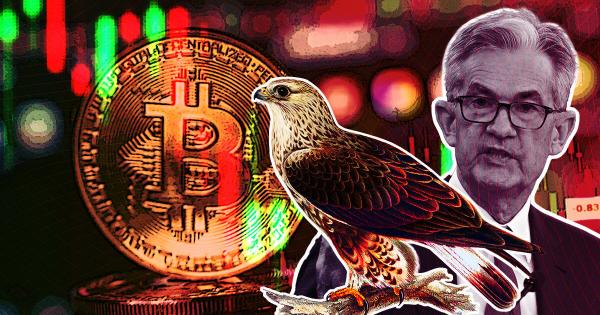 The market price of bitcoin stayed pretty much flat for most of the first week in April. But as the U.S. Federal Reserve signaled higher and faster interest rate hikes, and quantitative tightening of its $9 trillion balance sheet, the general market took a turn downwards, and bitcoin (BTC) went down with it as the premier cryptocurrency by market cap has a hard time getting away from the correlation with the S&P 500.

In the early hours of Friday, April 8th, bitcoin tumbled well below $43,000 but has since recovered to levels before the Fed’s announcement and the release of Fed’s meeting minutes from Wednesday’s FOMC meeting.

The trend for the past month, however, has been led by Terra’s announcement that their UST stablecoin will eventually be backed by bitcoin at a value of $100 billion. To that point, Terre has been buying bitcoin at a rate of 26,000 BTC for the past 30 days, assumingly putting a heavy buying pressure on bitcoin, and consequently driving up the price.

According to a report by on-chain data analysts IntoTheBlock, Terra’s buying spree has not been enough to move the market to any greater extent. In fact, bitcoin’s price increase throughout late March is likely more due to the psychological factor of having a large whale such as Terra avidly accumulating, and thus deterring sellers, rather than the actual buying propelling the rise.

Meanwhile, bitcoin saw mild exchange inflows, a sign of selling pressure, of $60 million, down from last week’s $200 million, according to IntoThe Block. At the same time, ether (ETH) recorded $888 million in net outflows from centralized exchanges, with over $5 billion leaving exchanges throughout the last four weeks.

As markets reacted negatively to news of a likely 50 basis points interest rate increase and quantitative tightening at the upcoming Federal Reserve meeting, on-chain data shows that large holders have been particularly risk-averse throughout this macro uncertainty.

To this point, the aggregate bitcoin balance held by addresses with 1,000 to 10,000 BTC dropped to the lowest in three months – these addresses are the largest holders of Bitcoin, with over a quarter of the total supply held by them, making their buying or selling activity especially relevant, according to InteTheBlock.

LFG has been one of the most avid bitcoin buyers

On the other hand, the balance held by addresses with smaller balances has been on an up-trend, with the group holding between 0.001 BTC and 0.01 BTC growing the fastest over the past 30 days.

Groups holding over 100 BTC have been mostly decreasing their positions, with the key exception being those that hold between 10,000 and 100,000 bitcoin.

Here Terra’s Luna Foundation Guard (LFG) has been one of the most avid bitcoin buyers, acquiring over 26,000 BTC over the last 30 days to be used as a backstop for the UST algorithmic stablecoin. Terra’s aggressive buying spree has led them to own over nine figures worth of bitcoin.

Optimism surrounding Terra’s (LUNA) announcement helped push bitcoin’s price higher throughout late March – the LFG has purchased just over 1,500 BTC per day since it announced its plans on March 21 based on inflows into their address.

However, to put this into context, Terra’s investments may seem large in nominal terms, but made up only a small portion of bitcoin’s daily volume. The 1,500 BTC average inflow into Terra’s address represents just 0.27% of bitcoin’s average daily trading volume, even though at its highest, on April 6, the LFG added $223 million worth of bitcoin into its wallet, which still only made up 0.88% of that day’s trading volume.

Positive news out of the Bitcoin Miami conference

This suggests, according to IntoTheBlock, that the impact in bitcoin’s price throughout late March is likely more due to the psychological factor of having a large whale such as Terra avidly accumulating deterring sellers, rather than the actual buying propelling the rise.

Bitcoin was unable to reach $50,000 thus far since recovering and faces a substantial concentration of selling pressure just below this level. To this point, about 2.2 million addresses that previously bought one million BTC at approximately $48,000 are making this an area of high trading activity acting as resistance, according to InteTheBlock.

On the support side, however, buying activity has been concentrated around the $40,000 level, where 820,000 BTC was previously acquired, making this the price to watch out for.

Aside from Terra’s buying activity, bitcoin also saw a wave of positive news throughout the Bitcoin Miami conference: Jack Mallers, founder of Strike, announced Shopify merchants will be able to opt-in to receive payments in bitcoin through the lightning network, and regions in Honduras and Portugal will support bitcoin as legal tender at the same time as Robinhood released their crypto wallet to 2 million users.

At the time of press, the global cryptocurrency market is valued at at $1.98 trillion with a 24-hour volume of $83.25 billion. Bitcoin dominance is currently at 41.00%. Learn more ›

END_OF_DOCUMENT_TOKEN_TO_BE_REPLACED

CEO of Zap, a bitcoin investment and payments company that transacts over the Lightning Network.

Strike allows users to send and receive money anywhere, instantly, with no fees.