As covered extensively by CryptoSlate over recent days, Ethereum’s network congestion is reaching an untenable point. 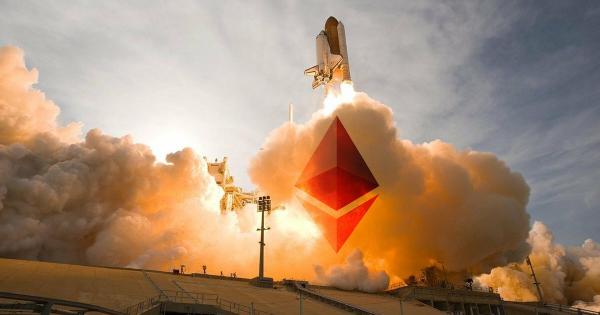 As covered extensively by CryptoSlate over recent days, Ethereum’s network congestion is reaching an untenable point. At one point in the past week, the average user of the blockchain was spending $50 in ETH to send a single transaction, effectively pricing out a majority of users.

To include a personal anecdote, this writer has spent over $1,500 on gas fees in the past two weeks.

With such extreme cost to send transactions, there have been some critics that say Ethereum is failing and will be overtaken by blockchain competitors.

Block.one‘s Brendan Blumer, for instance, has noted that EOS is the best blockchain suited for DeFi:

” #EOS has the performance, liquidity, and developer community to support #DeFi applications that aren’t possible anywhere else.”

#EOS has the performance, liquidity, and developer community to support #DeFi applications that aren’t possible anywhere else.

Other blockchain founders have made similar assertions due to the extreme fee situation.

An asset manager and author don’t think this is a concern for Ethereum’s long-term future, though.

Felix Hartmann, the managing partner of Hartmann Capital and an author, thinks that “ETH gas fees will not lead to an ‘ETH Killer’” eating the network’s lunch, so to say.

“Saying ETHs fees are its downfall is like saying the hottest club in towns downfall is that it’s at capacity, and you head over to the dead joint next door.”

Why ETH gas fees will not lead to an ‘ETH Killer’ eating ethereum’s lunch.

Time for a thread ⬇️⬇️⬇️

A key facet of his argument is that in Ethereum’s transaction fees rising, investors are shown that the applications on the network are actually “products people want” and are being onboarded into.

This is a good determinant for a blockchain’s long-term success because even if another network has lower transaction fees, if they have poor applications, then there’s no point migrating over to that network:

“The third world doesn’t need your clunky, hackable and buggy shoe stringed together protocol. If you don’t understand the importance of what’s going on right now with DeFi, including the absurd yield craze, you need to pause, reflect, and zoom out.”

Hartmann elaborated that the vast influx of users, capital, and even hacks that are taking place in Ethereum DeFi, will improve this market segment’s viability in the future.

“Sushis, yams, and pizzas probably won’t be here forever. Let the kids have fun. They’ll learn their lesson in terms of economics and risk. [… But] when the dust settles, we’re left with more capital and talent in the industry than before.”

That’s not to say that solutions aren’t needed. Far from.

“The only solution to high tx fees is scaling. Tether, Gitcoin and other apps are doing the right thing by migrating to ZK rollups today. I’m excited about the soon-upcoming optimistic rollups that will generalize rollup scaling to full EVM contracts.”

A quick thread on supply and demand economics, and why certain "naive" solutions to high gas prices won't work. pic.twitter.com/lmmyx0x8vL