Are you dedicated enough to get a tattoo of your company’s logo? Binance’s Changpeng Zhao is  Priyeshu Garg · 3 years ago · 2 min read
News › Singapore› Binance › People

A true measure of an entrepreneur’s dedication to his project isn’t the hours he puts in or the sacrifices he makes, but his willingness to have the logo of his company forever embedded on his arm. 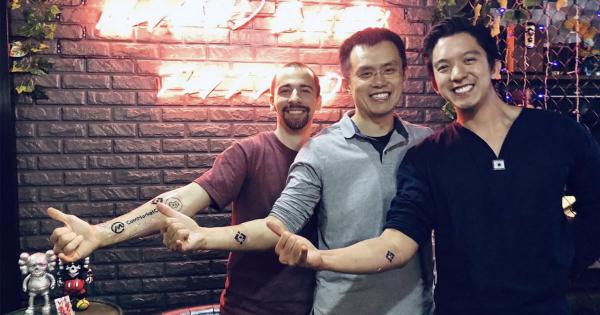 A true measure of an entrepreneur’s dedication to his project isn’t the hours he puts in or the sacrifices he makes, but his willingness to have the logo of his company forever embedded on his arm. The founder and CEO of one of the largest cryptocurrency exchanges in the world, Changpeng Zhao, certainly thinks so.

Almost exactly a year ago today, Changpeng Zhao shared a Medium post in which he shared the story of how he got the Binance logo tattooed on his arm. While it began as just an entertaining anecdote from, the story is a testament to the new generation of entrepreneurs that came out of crypto.

In his post, Zhao detailed how he got the idea for the tattoo while having dinner with Luke Wagman and Gareth Lai. Luke, a former analyst at Goldman Sachs and one of the founders of crypto tracking website CoinMarketCap, dedicated the better part of his forearm to his company’s logo. This, alongside a substantial Bitcoin logo tattoo, grabbed Zhao’s attention.

When Wagman said he would like to include the Binance logo on his forearm, Zhao couldn’t sit back and remain idle. He wrote in his Medium post last year:

While the story didn’t manage to get any more interesting in the year since it was posted, it stands to show what goes through the minds of some of the most successful people in the industry.

Measuring commitment to crypto in ink

The point of the story was to highlight the importance of commitment and persistence in the industry. He explained that both he and his Binance team always want to make sure that the founders of the coins they list on the exchange are fully dedicated to their projects.

Weeding out projects with less confident leaders could boil down to just one thing, he explained. If Binance’s listing application asked the company’s founders whether or not they have tattoos of their logos, it would be much easier to determine just how committed they are.

However, figures as outspoken as Zhao tend to cause a massive rift between people. While some praised his unusual listing practices for being more open and genuine, others bashed him for promoting shallow ideas. Many Twitter users said that dedication isn’t measured in ink, noting that there are numerous reasons why someone might decide against a tattoo.

Nonetheless, few can deny the cult-like dedication Zhao and his peers put into their work. The industry is led by a new generation of leaders, ones that believe it was solely built on drive and devotion.