Amazon Web Services have recently launched a new foray into the world of distributed ledger technology, announcing the release of AWS Blockchain Templates for Ethereum and Hyperledger Fabric. 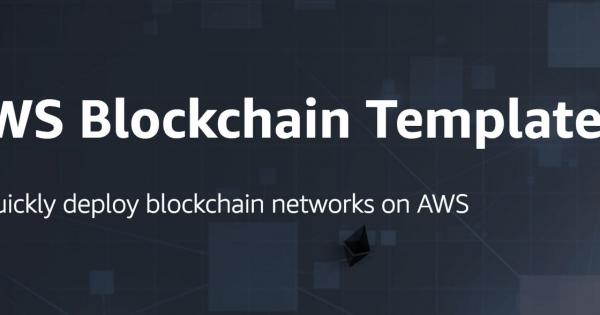 Amazon Web Services have recently launched a new foray into the world of distributed ledger technology, announcing the release of AWS Blockchain Templates for Ethereum and Hyperledger Fabric. The new blockchain templates will make it possible for users to build their own blockchain networks quickly and easily.

The launch was announced via the AWS blog on the 19th of April, heralding the web services giant’s first significant sortie into the blockchain ecosystem. Jeff Barr, the Chief Evangelist for AWS, posted a lengthy explanation via the AWS news blog detailing the specifics of the new service:

“We are launching AWS Blockchain Templates today. These templates will let you launch an Ethereum (either public or private) or Hyperledger Fabric (private) network in a matter of minutes and with just a few clicks. The templates create and configure all of the AWS resources needed to get you going in a robust and scalable fashion.”

Amazon has remained reticent regarding its stance on blockchain technology, discreetly registering several crypto-related domain names at the end of 2017 and, more recently, announcing an initiative intended to drive blockchain development through their partner ecosystem.

AWS has already partnered with organizations such as Sawtooth, Corda R3, PokitDok, and Quorum, and is specifically focused on identity resolution, auto-adjudication, and supply chain integrity applications. Of these partnerships, Corda is one of the most interesting — as one of the first blockchain platforms on AWS, Corda allows users to create distributed apps on the AWS platform.

AWS users are able to select from two different launch options when using the Ethereum template. Blockchain networks launched via the template service are deployed as containers on Amazon’s Elastic Container Service, or directly on an EC2 instance running Docker

Ethereum networks launched via the template support Ethereum mining and provide an EthStats page for network metrics as well as an EthExplorer toolkit that allows users to explore smart contracts and transactions entered into the ledger.

The opportunity to launch Hyperledger networks with minimal effort via the new AWS template service is a potential game-changer for organizations seeking to optimize identity service, auditability and privacy.

The use cases presented by Hyperledger are highly attractive to enterprise organizations — blockchain technology has a wide range of applications outside of financial services.

Both Hyperledger and Ethereum networks can be used in a number of industry use cases. Business contracts executed on a private blockchain benefit from unparalleled security while making contractual data easily discoverable by all parties on the ledger.

Asset depository is another powerful use case for large institutions, allowing for the dematerialization of assets in order to facilitate trades and information discovery. Leveraging the asset digitization potential of blockchain technology, it’s possible for organizations to add business rules to any asset, allowing for real-time asset management.

One of the most interesting applications of the new AWS blockchain template service is the opportunity it offers organizations to establish a discreet private supply chain network.

By making the process of launching private blockchain networks simple and cost-effective, AWS is setting the stage for widespread adoption of distributed ledger technology across all data and asset-driven organizations.

Amazon is Investing in the Future of Blockchain

Amazon is clearly aware of the importance of investing heavily in the integration of blockchain technology — Scott Mullins, AWS’s head of worldwide financial services business development announced last year that the organization aims to position itself at the vanguard of institutional blockchain adoption:

“Today in financial services, distributed ledger technology is at the forefront of any discussion related to innovation. AWS is working with financial institutions and blockchain providers to spur innovation and facilitate frictionless experimentation”

The new AWS instant blockchain templates may be the first major product release from Amazon to integrate distributed ledger technology, but it certainly won’t be the last.