Since its launch in August 2020, Shiba Inu has been burned in a bid to cut its 1 quadrillion circulating supply. The milestone half way point is fast approaching. 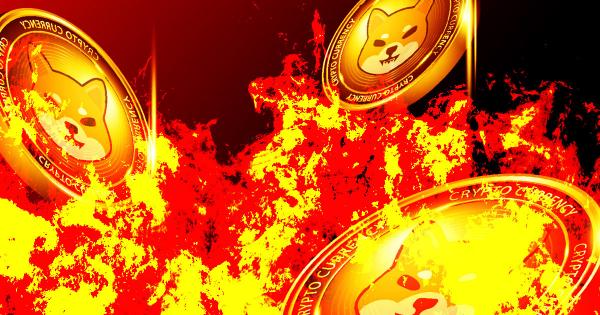 Since the start of September, 329.8 million Shiba Inu tokens have been burned, according to shiba-burn-tracker.com.

Shiba Inu tokens are burned on multiple occasions daily to tackle the issue of oversupply. Over the last 30 days, the most significant daily burn totaled 455,699,414 SHIB on Aug. 31.

Shiba Inu’s initial supply was just short of 1 quadrillion tokens, which hinders the ability of capital inflow to impact the token price positively.

The Shiba Inu community has its sights set on a $0.01 token price. But to achieve this based on its current circulating token supply, the SHIB market cap would need to be just under $5.5 trillion, equating to more than 5.5 times the existing total market cap.

By burning tokens, the number in circulating supply reduces over time and, in theory, should elevate the SHIB price.

The website shibburn.com illustrates the effect of token burns to date. The graphic below shows the project is approaching a halving of the initial supply. However, given the vastness of a quadrillion, burning multiple millions daily will some time to reach that point.

Meanwhile, since July 12, Shiba Inu has been posting marginally higher lows leading to a gradual incline in the support price. However, similar to all altcoins during this bear market, SHIB is  86% down from its all-time high of $0.00008616 achieved on Oct. 28, 2021.

SHIB Metaverse in the works

The latest blog post from Shiba Inu revealed plans to develop a Metaverse, called WAGMI, in conjunction with art studio The Third Floor.

“WAGMI is short for “We’re All Gonna Make It”. It refers to a higher conviction and optimistic state about the future. The foundation of SHIB has always been the community.”

Currently, the project is in the early stages of development, with ideas being floated via concept artwork. The post stated that this is common practice in film and video game development to “present a set vision” and inspire “a deep connection with the atmosphere.”

The sketch below depicts the WAGMI temple and surrounding landscape, which is described as a “zen-inspired architecture” that captures the concept of a chilled and calming environment.

Research: What exactly happened in 2021 for Shiba Inu?