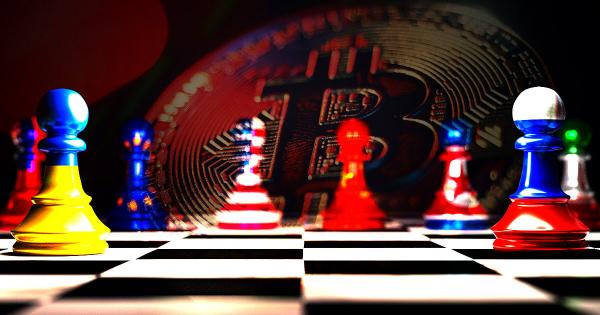 Since the outbreak of war in Eastern Europe, Bitcoin and cryptocurrency have featured on both sides of the conflict.

In the case of Ukraine, at the start of the war, government officials called on the crypto community to donate funds. At the same time, Russia opted for a more inclusive approach, including U-turning on its previous plans for a crypto ban and formulating a legal framework.

According to the FT, the Bridgewater hedge fund said all of this points to the war being a catalyst for digital asset growth – more so as this comes at a time of maturation, particularly in relation to an institutional interest in cryptocurrencies.

“These shorter-term dynamics are occurring alongside structural changes in cryptocurrency markets that we believe are self-reinforcing, as adoption by key institutional investors increases and the surrounding ecosystem deepens.”

NATO Secretary-General Jens Stoltenberg warned that the Russia-Ukraine war could last for many years. In the six months since the outbreak, posturing between NATO and Russia, not forgetting tensions running hot between the U.S and China over Taiwan, demonstrate the threat of world war is a growing possibility.

With that, thoughts turn to the role of cryptocurrencies under such a scenario and whether World War 3 could be a spur for greater adoption and use.

On June 20, Russian officials demanded Lithuania lift rail restrictions to Kaliningrad. The Russia exclave is located between Lithuania and Poland, to the east of Moscow, and receives goods from Russia by a railway route running through Lithuania.

NATO member Lithuania had banned the transport of goods between Russia and Kaliningrad due to the enforcement of EU sanctions.  The Russian Foreign Ministry responded by saying Russia has “the right to take actions that protect its national interests.”

Article 5 of the Washington Treaty stated an attack on a NATO member is an attack on all members and may result in “collective defense measures” against the attacker.

Fortunately, more than a month on, the incident has not escalated. Nonetheless, that flashpoint demonstrated the potential for tensions to erupt into something much greater.

Similarly, tensions between the U.S and China have become further strained over House Speaker Nancy Pelosi’s visit to Taiwan on August 2. Before the visit, in a phone call between President Xi and President Biden, Xi said, “those who play with fire will perish by it,” according to the Chinese Foreign Ministry.

Despite the warning, Pelosi went ahead with the trip, where she met with members of Taiwan’s Legislative Yuan and the chairman of Taiwan Semiconductor Manufacturing Company (TSMC), Mark Liu.

Commenting on China’s “aggression” ahead of the visit, Pelosi said her defiance of Beijing should be taken as a declaration of America’s support of Taiwan.

“In the face of the Chinese Communist Party’s (CCP) accelerating aggression, our congressional delegation’s visit should be seen as an unequivocal statement that America stands with Taiwan, our democratic partner, as it defends itself and its freedom.”

China responded by imposing sanctions on Taiwan, stopping the export of certain foodstuffs and natural sand. As well as commencing live military drills around Taiwan, with some exercises occurring less than 10 miles from the Taiwanese coastline.

Crypto is a substitute for legacy finance during times of distress

With no frame of reference to draw from, it is unclear what could happen to cryptocurrencies in the event of a world war.

On a nation-state level, it has been demonstrated that demand for digital assets tends to spike in times of distress. An example of this is hyperinflation in  Venezuela, which led to surging Bitcoin demand and price premiums. At one point, Venezuelans were paying on average $1,980 (or approximately 20% at the time) above the spot price.

According to the Center for Strategic and International Studies (CSIS), Venezuelans turned to Bitcoin, and other cryptocurrencies, for several reasons, including wealth preservation, censorship-resistant overseas remittances, humanitarian aid, security against petty theft, and financial inclusion.

However, what happened in Venezuela is not the same as what could happen during a world war, which may involve the destruction of communications and energy infrastructure on a global scale.

Bitcoin demand would likely act as a tailwind for price

By email, the CEO of blockchain analytics platform Covalent, Ganesh Swami, shared his thoughts, saying, in the event of a world war, it’s likely several factors would converge to trigger “an immense spike” in Bitcoin price and adoption.

By extension, it is anticipated that this effect would also lift the rest of the cryptocurrency market as investors cycle between tokens to maximize gains.

Swami said a world war may lead to the mass migration of people as they evacuate to safer countries. Subsequently, migrants may turn to Bitcoin to transport wealth “without fear of losing it,” which would not be the case with cash or precious metals.

“Unlike paper currency or gold, which can easily be found, stolen or confiscated, all you need to covertly store your bitcoin is your seed phrase. This increase in adoption would impact price.”


Likewise, another factor in the mix may be the loss of energy security. In this situation, miners would struggle to keep the machinery running and/or mine profitably. Swami said this could cause “the existing supply to plateau,” leading to scarcity and acting as a tailwind for the Bitcoin price to move higher.

For now, the world is on stand-by in anticipation of what happens next.