Why is David Beckham shilling a low cap layer one blockchain?

Beckham has teamed up with Digitalbits to promote their brand focused blockchain and the price is down 20% on the day. 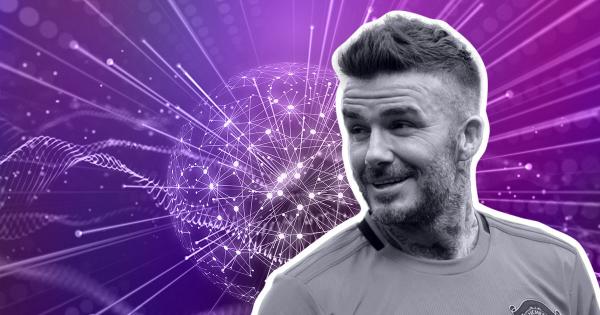 Digitalbits, a layer one blockchain solution with a market cap of just over $400 million, announced that David Beckham will be their new global ambassador. According to the statement, he will “help to communicate the transformative power of the DigitalBits blockchain to consumers, brands and other organizations worldwide.”

The press release reads much more like a letter to VCs than a value proposition to developers or retail investors. There is a strong focus on the power of the David Beckham brand, the companies he has worked with and the size of his social media following. While these elements appear to be bullish for the project, their token, XDB, is down 20% on a day where Bitcoin broke $45,000.

Recently, Jake Paul has been criticized for making millions in pump and dump crypto schemes and Kim Kardashian and Floyd Mayweather promoted Ethereum Max, only to be later sued by investors. These are just a handful of the times where celebrities, who know little to nothing about blockchain, have been paid to shill a project.

Yet, the name David Beckham is not often heard alongside the other names in this paragraph. He is known for his charitable nature and has taken to savvy business acquisitions since he retired from football. Guild Esports, a London-based gaming company, co-owned by Beckham, is one of these investments. Perhaps he thinks that a move into the ‘metaverse’ is the next logical step in developing his brand?

Beckham is no stranger to the global ambassador role. It is one he has taken with companies like UNICEF, AIA. Maserati and Tudor. As Digitalbit point out, Beckham has an enormous brand reach, and he knows it. His primary collateral is his image, and as a result, he will sell the rights, for a time, to any company that fits his vision and is willing to pay. The entire Digitalbits campaign is entitled “Beckham enters the metaverse,” and the campaign video starts with him kicking a ball of energy.

It has good energy and looks fantastic, but I wondered what it was actually saying. You can watch the sci-fi announcement video of Beckham’s arrival on the Digitalbits website. I read the press release, scanned the website, and watched all the PR material, and I still don’t know what David Beckham actually brings to the table other than his face. While that face has a massive reach, it is split across a dozen other companies who also deem him their ‘global ambassador.’

I like Beckham, I grew up watching him play in my home town, and he is a part of some of the best moments of my formative years. It is probably for this reason that I am willing to give him a break but I just can’t see how this isn’t simply about the money. When asked about the move, Beckham himself said:

“I am always keen to find new ways to connect with my fans across the world. The moment I spoke with Al and the DigitalBits team, I knew that this was a major opportunity to create new experiences for my fans online. I have always taken pride in working with the best teams and I am so excited to work on my NFT collections and more innovations in the future.”

Does he add value?

There isn’t much to his comments other than a possible leak of some official David Beckham NFTs on the Digitalbits ecosystem in the months ahead. The main title tag on the Digitalbits website reads “The blockchain for brands,” so it appears they are targeting traditional companies looking to move into blockchain.

For that reason, having to use Beckham to give you brand recognition may seem like a brilliant idea. The website and press also include a lot of in vogue phrases such as “eco-friendly blockchain,” “metaverse,” and “diverse regional strategy.”

However, I can’t establish why someone would choose an unknown, unproven blockchain to host their brand simply because David Beckham is in an advert. This may well be why their token tanked on the news; a true sell the news event.

If you’re still interested in the project, it is available on Kucoin and is actually up 2000% since July 2021. Is Beckham getting in at the top, or has he picked a fabled 100x gem? Let me know on Twitter what you think.