High fees and slow transactions are plaguing the cryptocurrency world at the moment, and one project is looking to change that. 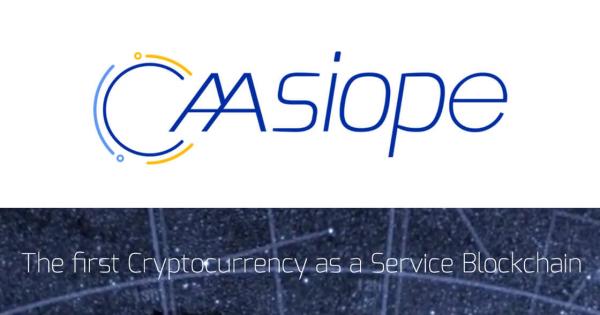 High fees and slow transactions are plaguing the cryptocurrency world at the moment, and one project is looking to change that. According to The Caasiope Network, they are the first cryptocurrency-as-a-service (CaaS). The project is being led by Guillaume BONNOT, the former BTCC Exchange Chief Engineer.

The High Fees and Scalability Issue

When you are seeking consensus across a decentralized network, there are bound to be bottlenecks. Bitcoin’s original “7 transactions per second” is no longer sufficient for the number of users who are transacting on the network

The cryptocurrency global market cap an reached all-time high in December 2017 and January 2018. The high prices and massive interest led to mainstream press coverage and a subsequent influx of new investors.

With the massive increase of users, the transaction volume skyrocketed, causing major transaction backlogs of hours or even days. Of course, this was not exactly the payments on the spot that are promised with cryptocurrencies. Fees associated with each transaction on the Bitcoin blockchain, which had been minuscule up until this point, began to swell, causing expensive and slow transactions to become the standard.

Bitcoin may be the most well-known cryptocurrency, but it’s certainly not the only one experiencing problems. When CryptoKitties launched in late November, it was an astronomical success. However, Ethereum users noticed that the blockchain had become incredibly congested with slow transactions which subsequently forced users to pay higher transaction fees.

Although the end goal for cryptocurrencies is mass adoption, due to the scalability problems, it is not currently feasible for everyone on earth to be transacting on the various network.

On an engineering point of view, there is only one way to scale Bitcoin, building new layers on top of it.

The Caasiope Project is hoping to solve all of these issues and return crypto to the original vision speeding up transactions and minimizing fees.

The Caasiope project is being led by Guillaume BONNOT, who noted that he is looking for alternative solutions to the proof of work consensus.

To do this, he has gathered a team of experienced blockchain developers. The protocol that they have developed to achieve these goals is the Cassiope Network.

“The idea behind the Caasiope Network was to create a lightweight blockchain on top of which you can run any business.”

The Caasiope Network is built as a layer-2 protocol designed to process cryptocurrency payments across blockchains through a single-entry point. As a result, making it possible for everyone to construct multiple services on top of its native protocol to facilitate interoperability between blockchains.

“Over time new blockchain projects are becoming more and more complex with more and more features, so they require an extensive amount of engineering to integrate into your business, I designed the Caasiope Network to be the most simple blockchain with only a few mandatory features, so we can focus on building services that will offer a better user experience. The next evolution of blockchain technology will be about layer 2 protocols, many different approaches from many different projects, but unlike layer 1, they are not going to be exclusive but complementary to the Lightning Network, RSK or the Caasiope Network have different uses cases and should be used in different situations.”

The founders of this project are certain that to solve this problem there must be a broad adoption of layer-2 technologies. By implementing a well-designed layer-2 blockchain, it will offer users strong security with minimal third-party trust, using an alternative consensus mechanism best suited to match the characteristics of a layer-2 blockchain.