Wanchain is extremely delighted to announce a partnership with the French securities and software as a Service (SaaS) company Talium with the launch of the first Security Token Offering (STO) platform on Wanchain. 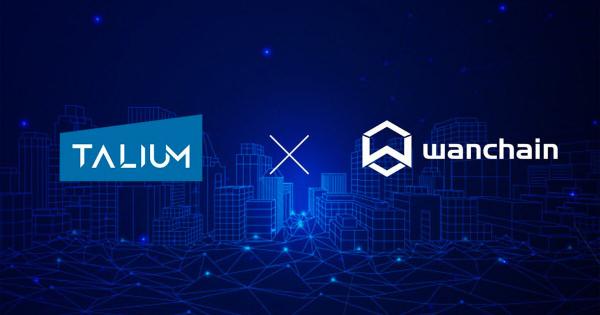 Wanchain is extremely delighted to announce a partnership with the French securities and software as a Service (SaaS) company Talium with the launch of the first Security Token Offering (STO) platform on Wanchain. Before diving into the platform release and technicalities behind it, let’s talk a little about the leading platform partner, Talium.

What is Talium, and who is behind it?

An Oracle Innovation Partner of the Year, Talium was co-founded in 2012 by MIT alumnus François de Chezelles (CEO) and applied cryptography specialist Julien Brodier (CTO). It initially provided traditional software and systems engineering services to multinational corporations in France, including but not limited to CMA CGM, Airbus, Atos, and Amadeus.

Focused on state-of-the-art technologies, it developed blockchain integration expertise along with 15+ projects since 2015, as well as confidential computing in-depth know-how.

Talium was one of the very first to develop and have a consortium blockchain project to go live, thereby implementing a full production-grade decentralized blockchain infrastructure (with Hyperledger Fabric), even before any Blockchain as a Service offer (BaaS) ever existed. This project deployed IoT-based P2P sharing of solar energy for French startup Sunchain. Another project of interest was for French startup BCdiploma, where Talium combined cryptography and a blockchain-agnostic architecture to save certificates directly onto blockchains while enforcing GDPR’s right to be forgotten.

Eventually, Talium developed unique skills to bring added value by combining blockchain with advanced data protection and confidential computing techniques. One such project ended up as an IBM Use Case. The use-case was in close collaboration with IBM’s US Cloud Security R&D team to use Fortanix’s revolutionary runtime memory encryption technology.

After having designed, integrated, and distributed several Utility Tokens, Talium started in 2018 the creation of a Digital Securities management framework called Talium Assets. Talium Assets provides investment intermediaries with a tool to build custom marketplaces for the distribution of financial instruments, and issuers with a compliant platform to raise funds (STO) or digitize their corporate governance.

Going forward, aside from the STO platform (which we will go over in a bit), Wanchain has been putting more resources into its suite of private blockchains “Lanchains.” A hybrid system is required to tackle the blockchain scalability trilemma termed by Vitalik Buterin.

You might be asking why this is related to the STO announcement. Well, because it is essential to understand why and how we combine these separate worlds (traditional financial world to this new web, 3.0). The decision-makers in the conventional business world are facing increasing pressure from shareholders to invest more in technology as technology is exponentially growing thanks (or no thanks) to what we understand simply as Moore’s Law. Although intel co-founder Gordon Moore did not come up with the term “Moores Law,” it has become a golden rule in our society with time.

Moore just made a statement based on his findings with the intel chip manufacturing over the years. Moore’s law refers to the “number of transistors on a microchip double every two years, though the cost of computers halves.”

Timing is crucial, and we’ve identified security tokens as a significant component of the growing new digital economy. We want to be part of this new revolution from the start and in every capacity. With the increasing technology demands and the pressure we’ve received from partners in Canada and parts of Europe, this security token offering platform is the only the first chapter of the STO book.

As well as inside the space, we have to keep up with new advancements outside of the blockchain industry and lead the way in decentralized finance interoperability. Which also means interoperability between legacy and blockchain systems.

Talium has developed a blockchain-agnostic & modular Security Token issuance solution which integrates all of the tools necessary for a compliant and robust security token issue, including:

Hold up, not so fast! Can you explain what security tokens are first?

In traditional finance, securities are defined as “ownership in a publicly-traded corporation” or “ownership represented as an option.” So what are security tokens? With the above illustration, a security token is the same, but the ownership information of this investment product stored on a specific blockchain. So Security Token Offerings are very different from Initial Coin Offerings. ICOs gave rise to “utility tokens,” which have a particular purpose and requirement when leveraging tools and decentralized applications on a specific blockchain.

Like in the case of “WAN” or “Wancoin,” it is required for transactions, delegation on the proof of stake platform, setting up smart contracts, deploying new tokens, and for cross-chain transactions and storemen node incentive mechanisms. This is structurally and fundamentally different from a security token, which is an investment product governed by security laws in particular regions and has a dividend structure tied to it. To better understand how STOs differ from IPOs, we will use the illustration below created by Cointelegraph.

Now that you have a better understanding of what STOs consists of, we will share some details about the platform launching on Wanchain (which will launch at first on testnet with a mainnet launch shortly after).

The beauty of this is what we referred to before as “bridging legacy with blockchain”. We are able to issue the security tokens on Wanchain in their WRC14000 standard (or another security token standard, depending on the issuance partner) while keeping all of the investor documentation and details, secure and protected in an off-chain database thanks to Talium’s state-of-the-art security and compliance platform.

Concrete details about the first STO launches are expected by the end of the year, with a focus on more partnerships and integrations in the STO space in the coming months.

Aside from this, we have prepared a series of community events with our partner so you can take a deep-dive into what will soon become one of the leading STO platforms in the industry.

This is the first part of our STO announcement. In the next 3 weeks, we will be hosting various engaging community activities so you can learn more about our partner and the implications behind this launch.

Talium is a specialist in digital transformation

projects for enterprises of all sizes. Talium was established in 2012 as a Software as a Service (SaaS) company but since 2015, the company has been developing its competence in blockchain technologies and is now recognized for its unique experience and expertise in architecting, developing, and delivering some of the most advanced blockchain projects in France.