According to a press release on August 3, 2018, Intercontinental Exchange (ICE), the New York Stock Exchange (NYSE) parent organization and 22 other bourses (stock market in a non-English-speaking country), announced plans to launch a regulated marketplace for digital assets. 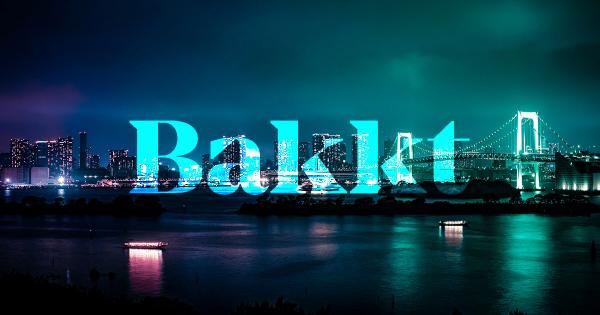 Photo by Helena Lopes on Unsplash

According to a press release on August 3, 2018, Intercontinental Exchange (ICE), the New York Stock Exchange (NYSE) parent organization and 22 other bourses (stock market in a non-English-speaking country), announced plans to launch a regulated marketplace for digital assets.

Bakkt Brings the World to Cryptocurrencies

As stated, ICE will use Microsoft cloud services to facilitate the building of an “open global ecosystem” for decentralized crypto assets. Called “Bakkt,” the enterprising solution for the massively unregulated and scrutinized digital asset trading sector features a vast group of organizations lending their infrastructure to create inclusivity for cryptocurrencies.

Bakkt features a lineup of marquee partners, such as Starbucks, BCG, Susquehanna Capital, and billionaire Alan Howard, with ICE hoping to create an institutional investor-friendly platform to purchase and trade digital assets.

To start, Bakkt will improve the trading and fiat conversion process for Bitcoin, as ICE considers the pioneer cryptocurrency the “most liquid” of all digital assets.

As indicated in the press release, the proposed ecosystem is fully expected to include “federally regulated markets,” apart from a merchant and consumer-centric applications.

Most interestingly, ICE confirmed the launch of “one day,” physically delivered Bitcoin contracts in the release, alongside offering warehousing facilities for storing bitcoins subject to approvals and reviews from the Commodity Trading Futures Commision (CTFC).

“These regulated venues will establish new protocols for managing the specific security and settlement requirements of digital currencies. In addition, the clearing house plans to create a separate guarantee fund that will be funded by Bakkt.”

By creating a trusted market interface for digital asset trading and investing, Bakkt supports the flow of fiat-to-cryptocurrency transactions, as noted by ICE. The bourse added that tapping the $270 billion market of cryptocurrencies needs a secure and efficient framework, which they intend to supply.

Earlier in May 2018, CryptoSlate reported ICE was intending to launch a Bitcoin futures product to rival with the lines of CME Group and CBOE, two prominent and influential bourses offering futures contracts on the pioneer cryptocurrency since 2017. In contrast to the two entities, ICE revealed all settlements would take place in BTC, instead of fiat.

At the time, the cryptocurrency community regarded the move and stated the development could mark the start of institutional money flowing into the cryptographic asset class.

Meanwhile, BCG senior partner Sean Collins pointed out the significance of blockchain technology as an improvement to currently used infrastructures in corporations. Collins noted companies across the world would “accelerate a range of innovation” if the burgeoning technology is implemented.

“As the flagship retailer, Starbucks will play a pivotal role in developing practical, trusted and regulated applications for consumers to convert their digital assets into US dollars for use at Starbucks.”

She added that Starbucks has more than 15 million “Rewards” users, and the coffee giant remains committed to expanding payment options for their loyal customers.

It remains to be seen if the launch of Bakkt proves to be a catalyst for unprecedented cryptocurrency usage, despite the asset class facing scrutiny from several government bodies across the world.