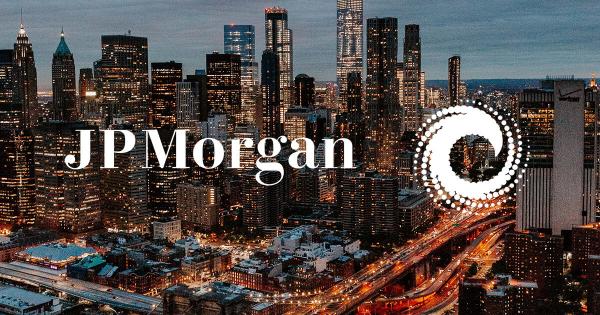 In a Reuters exclusive today, the breaking news outlet reported that banking giant JPMorgan’s blockchain unit “Quorum” and Joseph Lubin’s Ethereum accelerator ConsenSys are discussing a merger, according to people familiar with the plans.

A JPMorgan and ConsenSys marriage on the cards?

JPMorgan currently employes a team of around 25 people in its Quorum blockchain unit. Not only is Quorum built on the Ethereum blockchain but JPMorgan’s JPM Coin runs on top of Quorum as a stablecoin facilitating instant payments between institutional accounts.

According to the report, it’s still unclear whether the Quorum team will join ConsenSys after the merger. Moreover, it’s unlikely that a formal deal will be announced any time soon as talks remain ongoing. The financial details are also yet to be confirmed.

A trend of traditional finance merging with fintech startups

The move would mark another seachange in a steadily shifting horizon in which more incumbent financial institutions are scooping up or merging with agile fintech startups.

Incumbent financial services companies are going to spend the next 3-5 years buying up various fintech startups.

If they don’t, the startups will put them out of business.

Let’s also not forget that when Bitcoin came onto the scene more than 11 years ago, it was immediately dismissed by traditional banks. In fact, JPMorgan CEO Jamie Dimon was among its staunchest critics repeatedly calling Bitcoin “a fraud”.

They became involved in a sort of patent race with Bank of America leading the charge filing some 50 blockchain patents in 2018 alone.

Results have so far been mixed, although there does seem to be a marked preference for Ethereum. Both JPMorgan and Spanish banking giant Santander have opted for this blockchain over Bitcoin. In fact, Santander recently issued a $20 million bond on the Ethereum blockchain.

The JPMorgan Quorum blockchain unit is also currently running the Interbank Information Network, a payments network involving over 300 global banks.  As the largest bank in the U.S. by assets, JPMorgan merging its blockchain unit with the Ethereum co-founder Lubin’s blockchain startup is massive.

Talks of the merger come at a time when the New York-based ConsenSys recently announced a major restructuring. The move will cut as much as 14 percent of its workforce and is intended to separate its software development business from its venture activities. This will align its interests in merging with Quorum to grow this division.

According to the Reuters report, JPMorgan has been considering either “spinning off” Quorum or merging it for at least two years now. However, the idea is to keep the Quorum brand alive and the technology open source even after the merger.

JP Morgan has become the first US bank to create and test a cryptocurrency.