Is EOS a Factor in the Ethereum Price Crash? 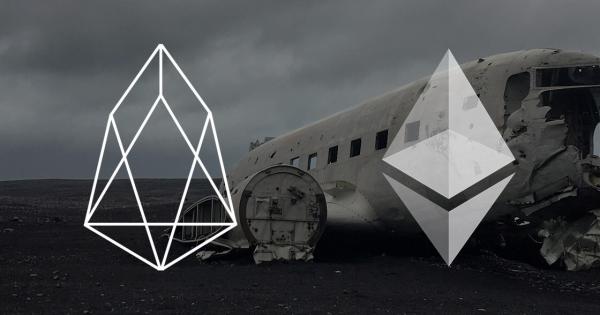 Photo by Josh Seff on Unsplash

Ethereum, the world’s second largest cryptocurrency, endured a significant downtrend in the past week – falling nearly 25% in price. With the EOS mainnet launch only days away, questionable sell-offs of ETH suggest the competing smart contract platform may be the price crash culprit.

Unusually high volumes of Ethereum trading on the Bitfinex cryptocurrency exchange indicates that the Ethereum price crash could be the result of one entity.

Trustnodes reported a staggering 180,000 ETH was sold within one hour on Bitfinex around 10 p.m. PST on Sunday, May 27th, while other leading exchanges, such as GDAX and OKEx remained stable – trading an average of 20,000 ETH per hour.

From early April 2018 to May 2018, Trustnodes reported that almost $950 million USD– or 1,268,066 ETH, was spent by EOS under its parent company block.one – a total transaction amount surpassing any other ERC-20 token at the time.

According to Etherscan, EOS still holds 237,000 ETH in its “EOSCrowdsale” wallet address with an additional 916,000 ETH held under the wallet address “EOS-Owner.” In total, EOS currently holds an aggregate amount of 1.1 million ETH.

Most of the 24-hour trading volume for Ethereum occurred on Bitfinex on the same day EOS was listed on the same exchange. Therefore, there’s speculation that the competing smart contract platform may be connected to the sudden decrease in Ethereum’s price value days before its ICO ends and mainnet launches.

EOS is currently trading at $10.96 USD with a total market capitalization of $9.7 billion USD.