President Putin authorizes military action in Ukraine leading to panic selling in crypto markets. Depending on how the international community responds, worse could be to come. 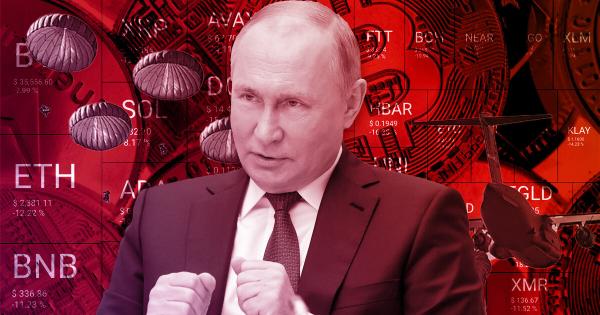 The total crypto market cap plunges to $1.52 trillion as Russia declares war on Ukraine. The next level of support, established during late January’s sell-off, is at the $1.49 trillion level.

But fears are, with the uncertainty of the situation, this level won’t hold, leading to freefalling prices across the board.

Bitcoin is down 8% to just above $35,000 at the time of writing. This tops a miserable week for the market leader, which has lost 20% in value over the last seven days.

The situation is worse for alts. Over the last 24-hours, most are nursing double-digit losses. Convex Finance (CVX) leads the pack, down 22%, followed by Mina (MINA) at -20%, with PancakeSwap (CAKE) currently carrying an 18% loss.

Shortly after a televised address by President Putin at 05:00 GMT today, explosions were reported near major Ukrainian cities, including the capital Kyiv. Witnesses say the night sky was lit up by rocket fire.

President Putin said the People’s Republic of Donbas had asked Russia for help. In response, he authorized “a special military operation” to ensure the protection of people against bullying. The objectives are “de-militarization” and “de-Nazification” of Ukraine.

Western leaders have yet to give a formal response. But President Putin warned of “consequences” should the international community interfere with the military operation. The Russian leader said Russia doesn’t intend to occupy Ukraine permanently and urged Ukrainian troops to lay down their arms.

“Our plans are not to occupy Ukraine, we do not plan to impose ourselves on anyone.”

Depending on the response of Western leaders, the situation could deteriorate further with catastrophic economic and geopolitical repercussions, including all-out war.

Yuya Hasegawa, Analyst at Bitbank, said the safe haven narrative has fallen apart over the Russian-Ukrainian conflict. Hasegawa commented that worse could be to come for financial markets as the relationship between the U.S and Russia becomes increasingly strained.

Bitcoin-bull Anthony Pompliano points out that Russia, as the third-biggest oil producer, is in a position of power. This implies global inflationary risk could worsen, as energy prices underpin every economic activity.

Russia is the third largest oil producer in the world.

The impact of this situation is going to be felt globally.

Russian-born Ethereum co-founder Vitalik Buterin tweeted he’s upset that President Putin has abandoned the diplomatic route. He called the military operation a “crime against the Ukrainian and Russian people.”

Buterin signed off saying he knows “there will be no security,” suggesting pessimism over a swift resolution.

Russia to reportedly consider crypto use for international payments