Bank of England's Jon Cunliffe said the crypto space should be brought under regulation to provide stability. 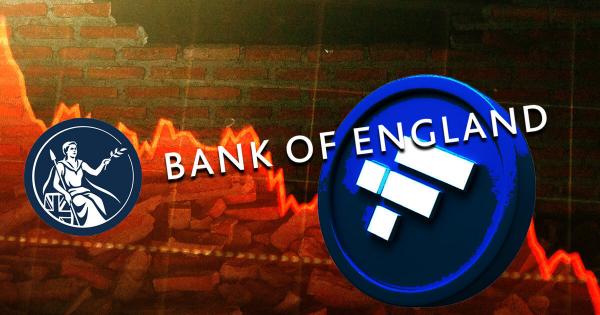 Bank of England’s (BoE) Deputy Governor for Financial Stability Jon Cunliffe published a speech on Nov. 21, where he said that the FTX collapse was triggered by an FTX Token run and that the crypto space should be brought under regulation to offer stability.

FTX collapse and the FTT run

Cunliffe talked about the recent FTX collapse and said while it is not possible to know the full scope of what happened, there have been some signs of trouble that regulators of financial instruments could have recognized.

Cunliffe said that the corporate structure, governance, internal controls, lending, brokering, and settlement activities of financial institutions are crucial to their health. FTX, on the other hand, came short in all aspects.

According to Cunliffe, FTX operated as a “conglomerate” where multiple products and functions are bundled within one firm. In a healthy traditional financial institution, these functions and products would be managed by different departments.

FTX also failed to properly consider the high volatility of unbacked crypto assets and couldn’t calculate its services accordingly, which led to its collapse. Cunliffe said:

“Indeed, in the FTX case, there are indications that it could have been a run on its crypto coin, FTT, which triggered the collapse.”

Referring to the (Terra) and the FTX collapse, Cunliffe said:

“The experience of the past year has demonstrated that it is not a stable ecosystem.”

He argued that this instability is because of the unbacked foundation of crypto and the utterly unregulated nature of the system. However, the Deputy Governor made no such comments on the nature of FIAT currency which also is not backed by any real-world asset.

According to Cunliffe, the only way to stabilize the ecosystem is to bring all crypto entities and activities within regulation. He argued that the crypto space should be brought under regulation for three reasons.

The first direction is to promote consumer and investor protection. Cunliffe said that it doesn’t matter if one thinks it is sensible to invest in “highly speculative assets that make up for most of the activity in the crypto world,” consumers should be able to invest in transparent, fair, and robust marketplaces.

Cunliffe’s second directive was to create a stable financial environment. He argued that the community shouldn’t wait until it’s too late -like in the case of FTX- and act proactively to prevent such disasters before they occur.

Finally, Cunliffe’s third rationale for bringing crypto space under regulation was to foster innovation. He claimed that innovation might start in unregulated areas but will only be developed and adopted at a large scale within a framework.

“By holding innovative approaches, using technological advance, to the same standards as existing approaches we can ensure that the benefits of new technology and new business models actually flow form innovation rather than from regulatory arbitrage.”