0x, a decentralized exchange protocol that enables token trading on the Ethereum network, announced that it has finalized plans for its next major update, that will be decided on by its users. All ZRX token holders will be able to cast their vote from Nov. 4 to Nov. 11, the company said.

Next updates to 0x to be decided by the ZRX community

Decentralized exchange protocol 0x announced that it has finalized its plans for the next major upgrade to the network. The protocol, which runs on Ethereum allowing ERC20 tokens to be traded on the Ethereum blockchain, is set to see its third version, 0x v3, come to life at the end of November. The company said:

“Version 3 of 0x is a major protocol upgrade that will establish 0x as the DEX + liquidity aggregator for the greater DeFi ecosystem.”

The holders of 0x’s native ZRX token will be able to decide whether the update goes through by casting their vote on the platform. The company said voting will begin on Nov. 4 and last until Nov. 11. If the v3 update gets approved, it will launch on the Ethereum mainnet after a two-week grace period, on Nov. 25.

V3 to bring more liquidity to the Defi ecosystem

While v3 will bring about quite a bit of innovation to 0x, most of them will focus on improving the protocol’s position in the DeFi space. The 0x team said that they developed “a powerful set of bridge contracts” that aggregate DEX liquidity both from 0x and other networks such as Kyber and Uniswap.

“With Liquidity Bridges, 0x becomes a one-stop-shop to source the best prices for both popular and long-tail trading pairs across DEXs.”

The upgrade will also bring about a ZRX staking mechanism that gives market makers monetary rewards (in ether) and additional ZRX voting power for providing liquidity. 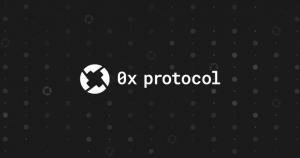 Designed with simplicity in mind, the Uniswap protocol provides an interface for seamless exchange of ERC20 tokens on Ethereum. By eliminating unnecessary forms of rent extraction and middlemen it allows faster, more efficient exchange. Where it makes tradeoffs, decentralization, censorship resistance, and security are prioritized. Learn More ➛