Bitcoin Amsterdam is excited to welcome Nigel Farage, British broadcaster and former politician who was Leader of the UK Independence Party, to headline Bitcoin Amsterdam 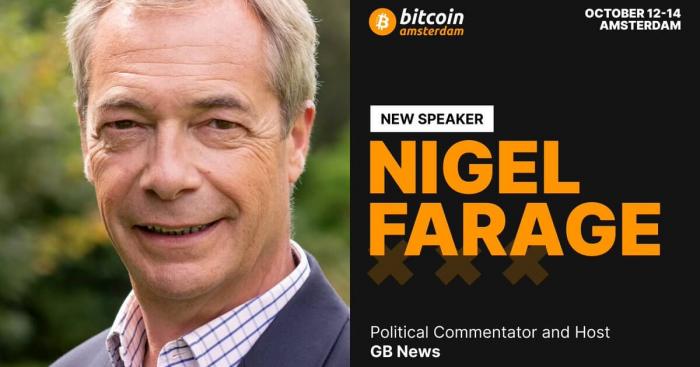 AMSTERDAM, NL – Bitcoin Magazine welcomes Nigel Farage, British broadcaster for GB News and former member of the European Parliament, Leader of the UK Independence Party, and Leader of Brexit Party, as the headliner for their upcoming event, Bitcoin Amsterdam. “Farage” on GB News will be airing live on Thursday, October 13th, the second GA day of the event, at 8 PM (GMT+2).

“This is an opportunity to wake people up to the fact that Bitcoin is a reality, and it’s here to stay. I am looking forward to coming along and broadcasting my GB News show live from the conference in Amsterdam.” said Nigel Farage.

During a fireside chat on the second GA day of the event [15:00 PM – 22:00 PM], Nigel will be joined on stage by some of his friends, including Liam Halligan, to discuss Bitcoin Policy in Europe. Farage is a long-time critic of FIAT policy, specifically the euro. Farage has been vocal on his concerns for the “euro project” and strongly opposes the use of bailouts, saying that “buying your own debt with taxpayers’ money” will not solve the problem and that, “if we do, the next debt crisis won’t be a country, it will be the European Central Bank itself”.

Along with Nigel Farage, Bitcoin Magazine has announced a fireside chat with Stella Assange, the wife of Julian Assange, founder of Wikileaks, and Gabriel Shipton, focusing on “Free Assange Now”. In February of 2022, the “AssangeDAO” raised 38 Million to fight legal fees. This chat aims to bring focus on Mr. Assange’s court battle and the benefits bitcoin gives to privacy.

The team behind Bitcoin Amsterdam 2022 has announced the FULL AGENDA for the event.

General admission tickets are currently $399 and Whale VIP Passes are $4,499. For further information on the event please visit our website at b.tc/conference/amsterdam and follow @bitcoinconfeur on Twitter.

To arrange a briefing about Bitcoin Amsterdam with Bitcoin Magazine or to discuss media inquiries, podcasts, and interviews for the event, please contact Christian Smith at [email protected]

Bitcoin Magazine is the oldest and most established source of news, information, and expert commentary on Bitcoin, and since 2012 has provided analysis, research, education, and thought leadership at the intersection of finance and technology. It is also the organizer of the cryptocurrency industry’s largest annual event – Bitcoin 2022

The Bitcoin Conference has grown tremendously since its first conference in San Francisco. Last year the team hosted over 26,000 attendees and over 400 companies in Miami. The organizers are also going global with the recent announcement of their European event – Bitcoin Amsterdam