CZ speaks to Bloomberg about Russian sanctions, but the intense line of questioning and interviewer's word association show strong media bias in favor of a blanket ban. 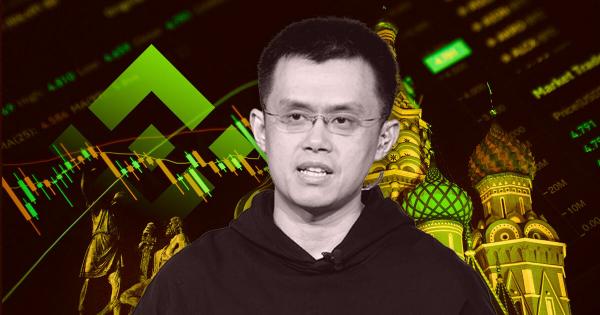 The Binance exchange finds itself playing intermediary as the war between Russia and Ukraine continues to rage.

Sanctions have cut several Russian banks from the SWIFT international payment network, triggering a bank run and the ruble’s collapse.

With Bitcoin being borderless and apolitical, it has been thrust into the spotlight as a possible way to evade sanctions. With that, many political figures, including Ukraine’s Prime Minister, call on centralized exchanges to enforce blanket crypto bans.

Although Binance has (so far) resisted this call, the broader issue shows centralized exchanges cannot operate with neutrality.

Is a blanket ban fair play?

Based on its cypherpunk origins, cryptocurrency was meant to be a tool for freedom of speech and privacy. The Cypherpunk Manifesto advocates that dealings between two parties are nobody’s business but the people directly involved.

“Each party can speak about their own memory of this; how could anyone prevent it? One could pass laws against it, but the freedom of speech, even more than privacy, is fundamental to an open society; we seek not to restrict any speech at all.”

The Russia-Ukraine conflict has led many to pick a side. But it remains true that freedoms should not be abandoned when the narrative doesn’t suit. Then again, the past two years’ events show that democracies are not as free as people presume.

Speaking to Bloomberg, Binance CEO Changpeng Zhao (CZ) said although the exchange has banned people on the sanction list, he thinks a blanket ban on all Russian crypto addresses is unethical.

“we view that we do not have unilateral decision power on our own to freeze normal people’s accounts. I think that would be, that’s unethical for us to do.”

Bloomberg continued to push the idea of a blanket ban by suggesting Binance doesn’t do this for fear of losing Russian customers to unregulated platforms.

In response, CZ reiterated what he said previously, that current sanctions only apply to certain connected Russians, not the entire population of Russian users. To that end, Binance is compliant.

“It’s not our decision to make to freeze user accounts etc. Facebook has not banned Russian users, Google has not blocked off Russia… we just follow rules we don’t make them.”

CZ added that people looking in on the crisis should separate the Russian people from the political system in which they live.

A blanket ban on all users would only hurt everyday people, some of which do not support Putin’s actions.

All the same, will Binance come under regulatory pressure to break its current stance?