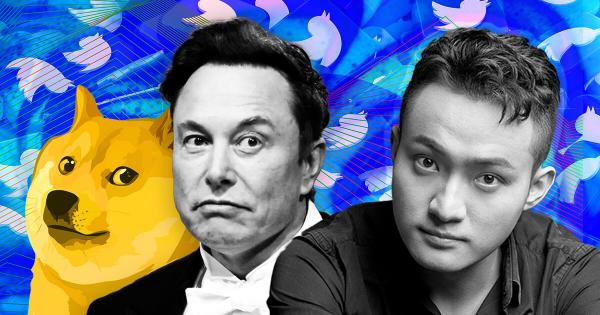 The biggest news in the cryptoverse for Oct. 4 includes Elon Musk making a new offer for Twitter, Celsius planning to auction assets, Justin Sun offering to buy Credit Suisse’s assets, and Charles Hoskinson calling for an end to Bitcoin mining.

Elon Musk is back on the deals table as he offers to buy up Twitter for $44 billion at $54.20 per share.

Following the news, DOGE spiked 8% to reach a high of $0.066. Elon Musk had earlier hinted at the possibility of using Dogecoin to pay for Twitter Blue.

Twitter bots are making the social media platform unconducive for many crypto giants, and the crypto community as a whole.

Buterin said that turning Twitter into an open API will see third parties come on board to help resolve the issue.

With the increasing utility of wrapped Bitcoin (wBTC) on smart contract platforms, Cardano’s founder has called for an end to Bitcoin mining.

Charles Hoskinson explained that Bitcoin mining may not be a good investment of energy as there is a lot more BTC in circulation that those left to mine.

Hoskinson added that since the Bitcoin blockchain is not optimized for other use cases, existing BTC should be converted into wBTC so they can be utilized across decentralized finance Dapps.

Global bank Credit Suisse is currently at the risk of a fatal collapse as its stock price has declined by over 60% (year-to-date).

Tron founder Justin Sun has hinted at possibilities of buying up assets of the struggling Credit Suisse and bringing them into Web3.

In a recent court filing, Celsius Network expressed intentions to auction off its assets to interested bidders. The auction is scheduled for Oct. 20 and may attract potential bidders like FTX and Goldman Sachs.

Many Celsius creditors including Simon Dixon object to the auction plan, saying that the firm needs a re-organization, not a sale.

Coinbase is set to release the ‘COIN” on Oct. 7. The documentary spotlights CEO Brian Armstrong’s story and journey to building the first publicly traded cryptocurrency exchange.

Armstrong said he intends to use the documentary to unveil what it takes to build a tech startup and encourage more people to build companies that can improve human existence.

DeSo was initially launched as Bitclout- a trading platform for “Creator Coins”.  However, since raising over $200 million in Sept. 2021, the platform has rebranded to position as a layer 1 blockchain powering decentralized social media applications.

Ripple has teamed up with climate startup Thallo to tap into the $2 billion carbon credits market.

Thallo leveraged Ripple’s carbon-neutral platform to build a marketplace to connect buyers and sellers of carbon credits, to execute their transactions in an easily verifiable manner.

Over $4B laundered through DEXs, coin swaps and cross-chain bridges, Elliptic report

Of the $4 billion laundered funds covered in the Elliptic report, about $3.3 billion was laundered through decentralized exchanges.

Three of the top leading DEXes (1inch, Curve.fi, and Uniswap) accounted for 75% of all illicit crypto swaps, while Paraswap and CoW protocol accounted for 14% of the laundering acts.

Despite the current -36% discount, investors’ interest in the GBTC shares remains low. However, some analyst predicts that the discount could vanish if Grayscale received approval to offer a spot bitcoin ETF.

Drawing a parallel with the first approved Gold ETF in 2003, CryptoSlate Research revealed that a spot bitcoin ETF could lead to a rebound in BTC price, and likely trigger the next bull run.

Bitwise has listed its Web3 ETF on the NYSE Arca, following a filing with the SEC on Oct. 4.