Crypto community expects Aptos blockchain to crash in price like Internet Computer, about 50,000 Bitcoins lefts Coinbase in one day and much more in this edition of CryptoSlate Wrapped Daily. 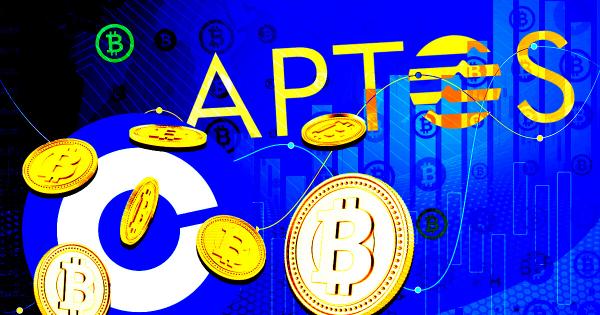 The biggest news in the cryptoverse for Oct. 18 includes Do Kwon claiming charges against him are illegitimate, Aptos blockchain criticized for processing only four transactions on launch day, and Roofstock selling its first on-chain house as an NFT for $175,000.

Thousands of Bitcoin leave Coinbase for the first time since June

Coinbase saw about 50,000 BTC leave the exchange on Oct. 18. There has been a gradual decline in its Bitcoin reserves since the start of March and more aggressively in June after the Luna collapse.

As of press time, Coinbase has approximately 525,000 Bitcoin in its reserve, representing a 22% decline from about 680,000 Bitcoin it started the year with.

Layer-1 blockchain Aptos launched on Oct. 17 but failed to impress the crypto community as it only completed 4 TPS as against the promised 160,000 TPS.

Aptos developers however claimed that the 4 TPS was a result of the network’s low activity, which would improve as user activity kicks off.

The future is getting bleak for the Aptos blockchain as many traders said they are looking to short the APT token, similar to what happened with Internet Computer in May 2021.

The shorts may start out anytime from Oct. 19 as Binance and OKX plan to launch the APT futures contract with up to 25x leverage.

Jack Dorsey announced the launch of AT Protocol as a decentralized, open-source, and ad-free network for federated social applications.

Users will be able to communicate with cryptographic URLs which will be identified by their domain names, and easily transfer their identities across social networks on the AT Protocol without losing their on-chain data.

Do Kwon, while speaking with Laura Shin on Unchained Podcast, said the Terra collapse was a result of failure in the protocol’s design and an intentional ploy to defraud investors.

He added that he found the charges against him illegitimate as cryptocurrencies are not classified as securities under South Korea’s Capital Markets Act (CMA).

Do Kwon regretted his arrogant attitude and sh*t posting on Twitter, and apologized to investors who were affected by the LUNA collapse.

Fed Vice Chair Michael Barr has urged banks offering deposit services to crypto firms to be aware of liquidity risks that may arise in the event of a crypto contagion.

Barr called on the U.S. Congress to provide a federal framework that will allow for the regulation of stablecoins as it could pose a risk to the financial stability of the nation’s economy.

Multichain wallet BitKeep lost $1 million to a hacker who exploited its BNB chain. Victims of the hack will be reimbursed by the protocol.

The development team has intervened in the situation by launching a Safety Assurance feature for users to verify their risk status.

Ethereum validator latetot.eth created a pool asking the fate of a solo validator who lives in a warring country but refuses to validate a block that includes transactions of funds moving to the military of the enemy country.

In his response, Vitalik Buterin explained that given the special case under consideration, the solo validator should be tolerated rather than being punished or asked to exit the network voluntarily.

Ripple’s Vice President Emi Yoshikawa has hinted at the possibility of enabling support for the creation of NFTs on Ripple’s XRP Ledger.

In addition, Ripple announced that it will offer $250 million as funding for Web3 and NFT creators looking to build their projects on XRPL.

Nuri, which filed for insolvency earlier in August, announced that it will stop offering crypto services and shut down.

Customers have been advised to withdraw all their funds from the platform by Dec. 18.

A three-bedroom property located at 149 Cottage Lake Way, Columbia was sold by Roofstock as an NFT for $175, 000.

The property identity was created as an NFT on the Ethereum blockchain and transferred to the house buyer’s wallet.

Bitcoin held on exchanges reaches its lowest since 4 years

Since the crypto market started declining from its November 2021 peak, over 300,000 Bitcoin have left crypto exchanges. This has lowered the balance on exchanges to its 4-year lowest, leaving only 2.4 million circulating across exchanges.

Despite losing over 50,000 BTC on Oct. 18, Coinbase surfaced as the most preferred exchange for users to buy and hold their Bitcoin.

A recent report by Coincub has ranked Germany as the most favorable crypto economy globally for Q3 2022.

The U.S., which came top in the last quarter, fell to the seventh position in the recent ranking.

Coinbase has teamed up with e-commerce platform Primer to allow merchants to add cryptocurrency as a standard method of payment for customers to choose from during checkout.

END_OF_DOCUMENT_TOKEN_TO_BE_REPLACED

Ocean Protocol is a tokenized service layer that exposes data, storage, compute and algorithms for consumption with a set of deterministic proofs on availability and integrity that serve as verifiable service agreements.