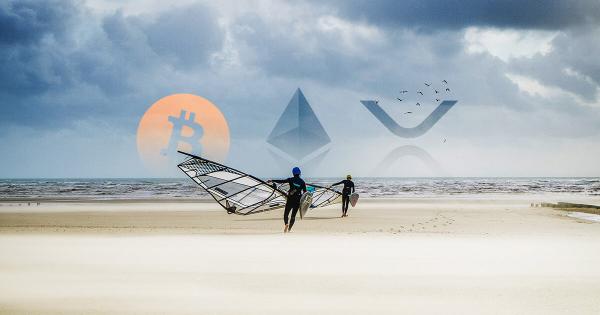 After the sudden spike in prices seen across the entire market last week, it seems like most cryptocurrencies entered a consolidation phase. Now, Bitcoin, Ethereum, and XRP appear to be bound for a significant move in the next few days.

At the moment, BTC is trading around the top of the channel after last week’s 40 percent upswing. This price level represents a pivotal point for Bitcoin’s trend.

A breakout of the descending parallel channel would be followed by a strong bullish impulse that could take this crypto to around $16,500. The 70 percent target to the upside is given by a significant bull flag that has been developing since late March. This is considered a continuation pattern that formed after Bitcoin surged to nearly $14,000, known as the flagpole, and was succeeded by the current consolidation period, known as the flag, which could result in a breakout in the same direction of the previous trend.

Nevertheless, if Bitcoin fails to break outside of the descending parallel channel, it would likely retrace to the next level of support around $8,500. An increase in the selling pressure behind BTC could prolong the consolidation period and trigger a move down to the bottom of the channel that sits at $6,600.

The 100 and 200-day moving average on BTC’s 1-day chart will play an essential role in determining the direction of the trend. A close above the 100-day MA would validate the bullish scenario taking Bitcoin to the next level of resistance around $11,300, where the 23.6 percent Fibonacci level sits. Conversely, a close below the 200-day MA would confirm the bearish outlook taking this cryptocurrency to the support levels that sit around $8,500, $7,300 and $6,900.

Based on its 3-day chart, Ethereum appears to have formed a double bottom pattern around the 75 percent Fibonacci retracement level. This technical formation developed as Ethereum plummeted to $153 on Sept. 26, surged to $198 on Oct. 11, and then pulled back again to $153 on Oct. 23. While Ethereum’s price behavior formed a “W” shape, the double bottom estimates a change in trend and momentum from bearish to bullish.

Despite the positive outlook that a double bottom presents, ETH is consolidating mostly between $180 and $186 for over the last week. The lack of volatility took the Bollinger bands in the 4-hour chart to squeeze. Squeezes are indicative of low price action, but they usually result in a period of high volatility.

Thus, the area between $180 and $186 can be considered a no-trade zone. Breaking outside of this trading range will determine where Ethereum is heading next.

CryptoSlate reached out to MindTrader, a well-known technical analyst, who revealed that he is “100 percent” bullish on Ethereum despite the minor up and down movements seen recently. The analyst believes that it is very like ETH bottomed out and could be on its way to new all-time highs.

XRP has seen a spike in its network activity, which seems to point out that the market is preparing for Ripple’s Swell. This is an invite-only annual conference, hosted by Ripple, where financial advocates meet to discuss the trending topics in the industry. In the past, XRP has skyrocketed in anticipation of this event.

In 2017, XRP hit a low of $0.15 around 30 days before the conference took place. Following this swing low, this cryptocurrency saw its price increase over 100 percent to reach a high of $0.30 on the last day of the event. As the market did not see enough value on the announcements made during the conference, XRP went through a 42 percent correction. After being worth $0.30 on Oct. 16, 2017, XRP plummeted to $0.17 only 17 days later.

Along the same lines, XRP experienced a 214 percent upswing last year in anticipation of Swell. This cryptocurrency went from trading around $0.25 to a high of $0.79 only ten days before the event. Then, after the conference was over, XRP plunged 64 percent over the next two months hitting $0.29 on Dec. 15, 2018.

Although XRP is up more than 40 percent from the low of $0.21 it made on Sept. 24, it remains to be seen the impact of the announcements that will be made in this years’ Swell.

In the meantime, XRP continues consolidating within a no-trade zone between $0.24 and $0.30. This trading range is containing the price of this cryptocurrency since mid-August without a precise movement that determines the direction of its trend.

A spike in volume may allow XRP to break outside of the current trading range where it sits. If this happens, this cryptocurrency could try to hit the next levels of resistance that sit around $0.38, $0.47 and $0.57. However, when looking at its 12-hour chart, XRP appears to be trading within an ascending parallel channel.

XRP is currently trading around the bottom of the channel. If the selling pressure increases around this point, this crypto could plunge to the $0.24 support level once again.

The current consolidation phase that the top three cryptocurrencies by market cap are going through sets the whole perspective in a neutral position. While the lack of volume across Bitcoin, Ethereum, and XRP adds credibility to the bearish outlook, the sudden spike in prices seen las week tells a different story. Whales could be accumulating these cryptocurrencies every time they fall, anticipating the continuation of the uptrend. Regardless, it will be wiser to wait for a break of the support or resistance levels before entering any trade.

XRP, the native cryptocurrency of the XRP Ledger and RippleNet developed by Ripple, is the only top 10 crypto asset to record a drop against the United States dollar year-to-date.

For much of Bitcoin’s 11-year lifespan, it has been laughed off as nothing more than an experiment— a worthless form of “magical internet money” for those on the fringe.