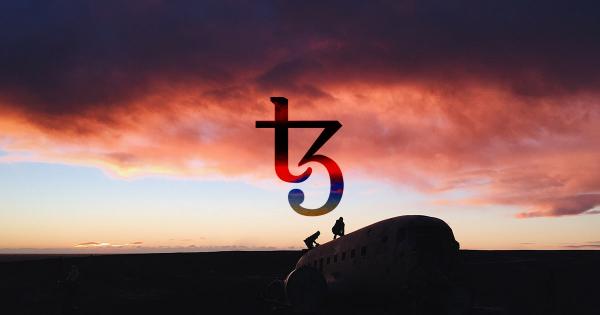 Photo by Tory Doughty on Unsplash

This appeared to incentivize investors to purchase XTZ, thus creating some strong buying pressure while also allowing the crypto to incur heightened fundamental strength due to the new batch of investors staking their tokens.

Now, analysts are noting that the crypto’s strong uptrend is far from being over, with one prominent trader forecasting that Tezos will climb another 40 percent before it hits its strong supply zone.

At the time of writing, Tezos is trading up over 15 percent at its current price of $2.65, which marks a notable climb from its daily lows $2.10 that were set around this time yesterday.

In the near-term, XTZ has faced some strong resistance at $2.70, and its slight rejection at this level suggests that it may now enter a consolidation phase or drift lower before finding enough strength to further extend its momentum.

This level has historically been a strong resistance level for Tezos’ Bitcoin trading pair, as the crypto has been rejected at 0.000265 BTC on multiple occasions throughout 2019.

Bagsy, a prominent cryptocurrency trader, spoke about this in a recent tweet, explaining that he believes “fourth time is the charm” when it comes to XTZ attempting to break through this resistance.

“XTZ Something something fourth time is the charm.”

XTZ could continue surging if it breaks above this level

A break above this level would be significant for the cryptocurrency, as it would point to significant underlying strength amongst the token’s buyers.

As for how high a break above this level could lead XTZ, it appears that it could rally until it hits its next supply zone at roughly $3.66, which would mark a roughly 40 percent climb from its current price levels.

Bagsy further went on to speak about this possibility, explaining that this is his USD target if Tezos breaks above its aforementioned BTC resistance level.

“XTZ USD: IF we break out from the range on the bitcoin pairing, this is where I’d take the USD pair.”

How the crypto responds to this critical resistance will likely offer deep insights into where the cryptocurrency is heading next, as a rejection here could spell trouble for where it goes next.

Tezos (XTZ) made it back into the top 10 cryptos by market cap; what’s next?

Over the past 24 hours, Tezos moved back into the top 10 cryptos by market cap, according to CoinMarketCap.