Vitalik Buterin discusses how Google could use Ethereum for better “spreadsheets” 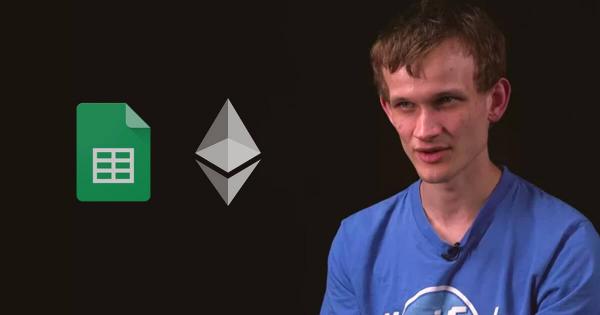 Naysayers of blockchain technology relegate to a singular narrative whenever given the chance — is blockchain or DLT any better than being a glorified database?

When Vitalik Buterin, Ethereum’s co-founder, was asked the question, you’d bet his reply was nothing short of insightful.

It’s all about centralization

Udi Wertheimer, the host of the Reckless Review podcast, invited Buterin for a one-on-one about “Why are blockchains better than spreadsheets?” The latter started by breaking the question into two parts; 1. Why is the Ethereum network better than a Google-run single node, and 2. Why is a Google-run Ethereum chain better than the proprietary “Spreadsheets” service.

Terming it “GoogThereum” for clarity, Vitalik states three “risks” such a platform would face, but Ethereum wouldn’t:

The second and third points have a “strong case,” such as articles here and here show respectively. Buterin further noted the abuse of power by centralized application is not a “tinfoil hat ideology.”

But the web already allows for the eradication of censorship to some degree, Udi said in response. Disgruntled users could, in theory, always move to different servers in case of a compromise.

So I suppose you *could* build a consortium chain with some nodes run by Google, some by Huawei, some by (checks notes for European tech company) The Pirate Bay. And I agree that would be a step up in addressing all these concerns.

But note that by going even this far you're losing a lot of the advantages of centralization. And it turns out that for whatever reasons, setting up such a chain is socially hard; after over half a decade of hype they don't exist yet.

The conversation then shifted to The Pirate Bay, a popular torrenting service that has been under global scrutiny ever since it launched. Udi, in this regard, said the site is a good example of how websites can survive censorship attempts.

Domain hopping and being on-the-run from the law, all while ensuring the site is active, could probably work for torrent operators. But for founders of a cryptocurrency, such tactics can’t be used for the long-term maintenance of a decentralized network, which for all purposes, is much complex than a website.

But a cryptocurrency isn't the only application with long-term state of this type; a decentralized DNS-like system is another system. Also cryptocurrencies with more advanced features, eg. stablecoins / synthetics.

Meanwhile, Buterin spoke about a hypothetical GoogThereum, one where everyone can view the blockchain but only Google can interact with the data:

“I suppose the main practical benefit of Ethereum over GoogThereum is just being on the same platform as the various other Ethereum-issued assets.”

“GoogThereum would have a hard time getting the same network effect because of all the trust and risk-of-shutdown issues mentioned (…) sure, the apps can hop, but they can’t easily coordinate hopping to the same new platform,” he added.

A major benefit of a blockchain-based data network would be interoperability, which Udi noted:

Most of the benefits seem to be achieved by having shared APIs, ie ERC20.

But other chains support that. ie GoogThereum and AmazThereum could both support the ERC20 API making it easy to integrate exchanges/wallets etc.

we already see that with ERC20-compatible chains

The two also spoke on USDT, Omni protocol, stablecoins, and the response of users towards a crypto-incentivized ecosystem. Although Buterin did not reply after a while, Udi’s kept the gates open:

OK so the thing about unscheduled live tweet talk shows is that you never know exactly where they end.

I think at this point I’ll thank you for participating in the first UNTROLLABLES, I really enjoyed the discussion!

Of course feel free to add anything if you’d like 🙂 pic.twitter.com/95bTflFt4s

The above is part of a longer tweet discussion edited for clarity and focussed on “GoogThereum.” The full conversation can be found here.

DARMA Capital, a $100 million investment firm heavily invested in Ethereum, is opening to investors who want to go long on cryptocurrency, as first reported by Bloomberg.