Ethereum’s price action has been rather lackluster in recent times, but this hasn’t been enough to slow its thriving utility. 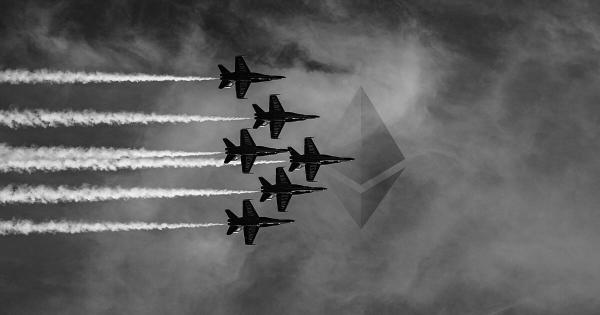 Photo by Stephen Leonardi on Unsplash

Ethereum’s price action has been rather lackluster in recent times, but this hasn’t been enough to slow its thriving utility.

This utility has been largely rooted in the growing popularity of DeFi and Stablecoins, which have both directed a massive amount of network activity to the Ethereum blockchain.

Although it hasn’t yet been reflected in ETH’s price, data does seem to suggest that this mounting utility is leading to increasing demand for the cryptocurrency.

This comes shortly after news broke regarding budding institutional demand for the cryptocurrency.

Ethereum has been caught within an extended bout of sideways trading around $200 for the past several days and weeks, struggling to garner any significant momentum.

It is important to note that this sideways trading has caused ETH to severely underperform Bitcoin.

In spite of this, from a fundamental standpoint the cryptocurrency still remains incredibly strong, as it has been able to garner massive utility as the result of heightened stablecoin issuance on its blockchain as well as continued growth within the DeFi sector.

Spencer Noon, head of crypto investments at DTC Capital, recently noted that there is a connection between Ethereum’s utility and demand for ETH.

He explained that this connection can be seen while looking towards the massive amount of transaction fees being captured by miners as a result of the blockchain’s utility.

“There is a growing link between Ethereum utility and ETH demand. ETH miners have captured $3.5M in fees over the past 30 days. Below we can see that the demand for blockspace is mostly driven by stablecoins and DeFi, which together account for >63% of fees paid.”

The spotlight has mainly been focused on the mounting institutional demand for Bitcoin in recent times, but BTC isn’t the only cryptocurrency that is drawing “smart money.”

As reported by CryptoSlate previously, Q1 2020 was a great year for Ethereum in terms of institutional inflows.

Data from Grayscale Investment’s quarterly report revealed that inflows into their Ethereum Trust flipped that seen by their Bitcoin Trust in the latter part of the quarter.

It is possible that this number will decline in Q2, as the global economic turbulence seen throughout the past several months may cause institutional traders to place a heightened focus on Bitcoin – which has shown signs of trading like a “safe haven” asset.