Footprint Analytics: What differentiates Tron from other blockchains?

Tron is one of the world's largest blockchain decentralized application operating systems. 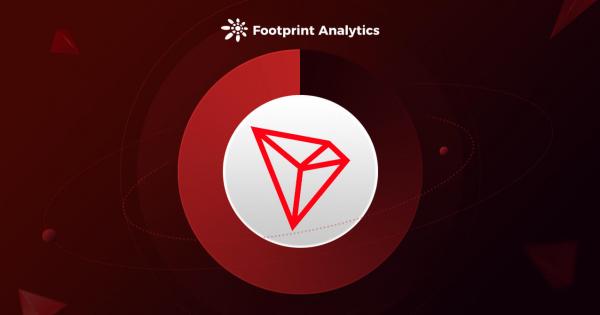 Going live on the mainnet in 2018, Tron’s total value locked (TVL) reached $11 billion on Dec. 9 (including its governance token, TRX, staked), according to Tronscan.

Tron is one of the world’s largest blockchain decentralized application operating systems. Tron provides compatibility with Ethereum smart contracts through a pluggable smart contract protocol. Tron is based on the improved consensus mechanism of dPoS (Delegated Proof of Stake), which ensures high TPS (transactions per second) throughout the network.

Tron’s development cannot be separated from its contribution to the ecosystem fund. Tron has been improving and arranging the infrastructure in DeFi, stablecoin, NFT, GameFi, oracle, etc., to expand Tron’s ecosystem map.

Over $450 million has been committed to rewarding participants in DeFi mining. The Tron Foundation has also launched several liquidity mining campaigns for lending protocols JustLend and JustSwap, and Tron founder Justin Sun will reward participating miners and veCRV holders by issuing 5 billion SUN tokens over a 5-year period.

TRON Foundation also launched a $120 million Tron DeFi eco-association program in September 2020, welcoming developers already on-board and on other blockchains. Since then, the foundation has held several developer conferences to promote the rapid development of the ecosystem.

On Oct. 26 of this year, Justin Sun tweeted again to announce that he would use the $1,111,111,111 fund to continue building Tron’s ecosystem. The fund will be the first to support Frog Nation, a DeFi project tweeted by Abracadabra co-founder Daniele Sestagalli under the slogan “Occupy DeFi” (#occupydefi), and the BitTorrent chain.

In addition to the massive financial support on DeFi, Tron has also joined in on NFTs. In November, to support NFT and artists, Tron created a $100 million fund in conjunction with NFT exchange APENFT, where artists can also receive advice on legal aspects such as copyright.

Increased investment in the DeFi project has led to a significant jump in TVL for Tron, which has reached $7.5 billion in DeFi according to Footprint Analytics.

One is the prediction of the market. TVL’s rapid growth relies mainly on the explosion of DeFi, which also proves the correctness of its strategic direction. Justin Sun believes that DeFi and NFTs are the biggest boom in the recent two years and will continue to plow deeper in these two areas.

Second, Tron has several distinct ecosystem advantages, such as having 2000 TPS, much lower fees compared to Ethereum, and a smoother user experience. One of the most attractive things for users is that it is free to transfer USDT in Tron.

Compared with the high fee of gas in Ethereum, zero fees is very attractive for those making small transfers. Users also do not need to pay for transferring and accessing system resources, and contractors do not need to access system resources, which in effect reduces the cost for developers. At the same time, developers, users and contractors can benefit from it, which is the source of high growth.

A detailed look at Tron’s sectors

According to the data included in Footprint Analytics, the main DeFi projects on the Tron are the lending project JustLend, the DEX project SunSwap, the stablecoin projects JustStable and SUN.io, and the cross-chain bridge Just Cryptos.

On the lending side, Tron’s first official lending protocol, JustLendTVL, had $1.7 billion as of Dec. 9. And on the DEX side, JustSwap was the first DEX protocol on Tron.

SUN.io, launched in September 2020, is the first integrated project on Tron that combines stablecoin exchange, mining and governance, with a TVL of $6 as of Dec. 9. SUN.io completed the purchase of JustSwap and will build SUNSwap, the largest DEX project on the chain. After the brand upgrade, SUNSwap will gather DEX, liquidity mining, stablecoin staking and governance. SUNSwap’s token will also be used for protocol governance and reward for LP. SUNSwap will fully feed the whole ecosystem construction of Tron and undertake the vision of Tron to benefit users.

For stablecoins, Tron’s layout includes the mainstream stablecoins such as USDJ, USDT, USDC and TUSD circulating on the chain. Together with the fact that USDT is free of transfer fees, experienced users usually use Tron’s trc20 instead of Ethereum’s erc20 when transferring USDT, making Tron exceed $10 billion in daily transfer volume of stablecoins many times.

TronLoot, a text NFT application protocol, has also launched its blind box redemption campaign in Tron, which allows users to open blind boxes, which can also be sold afterward. Compared with Ethereum, Tron has cheaper transaction fees, which allowed the game to gain significant popularity within half a month.

After NFTs, Tron also ventured into GameFi. Tron’s first horse racing game, WIN NFT HORSE, was launched on Nov. 28th jointly with APENFT Foundation and Winklink. In the metaverse, Tron also continues to explore, and has announced that Tron has completed the first-ever ecological complex with MetaEstate in Cryptovoxels.

Tron is actively building in cutting-edge areas of blockchain, such as GameFi, and continuously provides to developers and users with its ecosystem fund. After the fund is spent, long-term development of blockchains will depend on excellent developers to build applications on the chains that can attract users.

Footprint Analytics: What differentiates Tron from other blockchains?