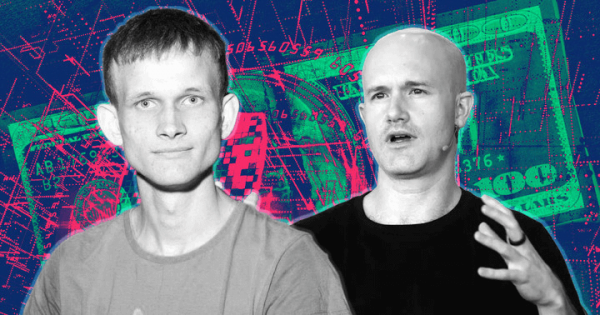 Vitalik Buterin said the cryptocurrency industry would benefit from developing new forms of stability away from dollar-pegged stablecoins.

Responding to Coinbase CEO Brian Armstrong, who asked if there was room in the market for a coin pegged to consumer prices, Buterin implied yes by explaining the limitations of fiat-backed stablecoins, especially in a high-inflation environment.

Speaking about creating a better, more inflation-resistant form of money, Buterin said the industry should move away from dependence on any single asset.

“Crypto needs to prepare to depeg from overreliance on any one particular kind of asset.”

Touching on USDC, the Ethereum co-founder pointed out the systemic risks involved with popularity. In that, popularity can often bring political influence, resulting in in-fighting and hard forks.

What’s more, he also posed the question of what would happen to dollar stablecoins “if something happens to the United States” or the dollar.

With that, Buterin thinks there is a need to “figure out” a standard of stability that relates to consumer prices, much more than one linked to a specific fiat currency.

Commenting on the Bitcoin maximalist argument that once BTC mass adoption occurs, it will be stable, the Ethereum co-founder said this mentality is “more an article of faith,” rather than “a sober assessment” of all possibilities.

Fed Chair Jerome Powell said households and businesses need to take account of inflation as it will take time to bring under control. The comments were made at an economic policy conference in Jackson Hole, Wyoming, on August 26.

Markets initially reacted by selling off, a pattern that continued into the following week. During this time, Bitcoin lost 7% of its value. Likewise, Ethereum fell by 8%.

Inflation has been a talking point since March when the Fed enacted its first rate hike in more than three years. However, six months on from that hike, the reality of the situation is now sinking in for everyday people.

Following Powell’s speech, New York Federal Reserve Bank President John Williams said the goal of bringing inflation down to 2% would take “a few years.” Further signaling that the situation is not under control.

“The situation is very challenging. Inflation is very high. The economy has a lot of crosscurrents. I do think it will take a few years, but we’re going to get that done.”

Meanwhile, commenting on spiking energy prices and the cost of living crisis, Goldman Sachs predicted that U.K. inflation could hit 22% in 2023. If this scenario played out, economists at the investment bank predict U.K. GDP to drop by 3.4%.

The situation is much the same across the rest of Europe, with soaring prices battering household budgets and squeezing consumer confidence.