Keiser on inflation: Americans with less than 20 Bitcoin are “not gonna make it” Samuel Wan · 7 months ago · 2 min read
News › U.S.› Bitcoin › People

Keiser on inflation: Americans with less than 20 Bitcoin are “not gonna make it”

Max Keiser says Americans with less than 20 BTC will struggle to survive in the coming months as inflation spirals out of control. 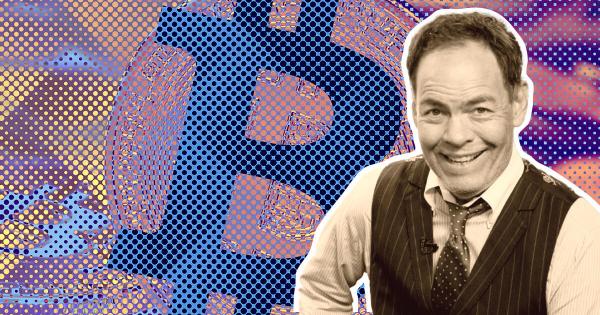 Bitcoin-bull Max Keiser gives a grim warning to Americans, saying those with less than 20 BTC are “not going to make it.”

The comment came in response to a Bloomberg opinion piece that concluded those earning less than $289,000 a year are most at risk from the unfolding cost of living crisis.

“After all, Americans at that level spend no more than 1% of their take-home pay on gas and oil, according to the Bureau of Labor Statistics.”

The median 2021 weekly wage for U.S workers was $989, or $51,428 annualized, meaning most Americans are significantly below the threshold calculated by Bloomberg. But is Bitcoin the answer?


Bloomberg gives tips on taking the sting out of inflation

Rampant money printing combined with historically low interest rates and a breakdown of the global supply chain has contributed to the highest spike in the cost of living for 40 years.

Hyperinflation is typically seen as a problem associated with irresponsible developing nations. But it’s happening right now in developed countries and few are adequately prepared for it.

Bloomberg says budget control is key to dealing with the issue. They advocate using public transport instead of driving and eating lentils and beans instead of meat. But perhaps the most challenging piece of advice given is to let a sick pet die rather than pay for treatment.

Inflation stings most if you earn less than $300K. Here's how to deal:

➡️ Take the bus
➡️ Don’t buy in bulk
➡️ Try lentils instead of meat
➡️ Nobody said this would be fun https://t.co/HGJEoXL5ZZ

The article read as a preface to accustoming people to accept a lower quality of life. It even dressed up the idea by saying we “create a locus of control” in following the advice.

“There’s an advantage to mixing up what you consume to cope with unusual price spikes: You become more resilient as you create a locus of control and interrogate your habits.”

The jury’s still out on Bitcoin as an inflationary hedge

Bitcoin maximalists claim Bitcoin “is the answer.” But there is, to date, no compelling evidence of its efficacy as a hedge against inflation.

Last week, AMC announced it had invested $28 million into a precious metal mine in Nevada, rather than add Bitcoin to its balance sheet. The move was somewhat unexpected as AMC had signaled pro-crypto sentiment in recent times.

Observers speculate AMC opted for this route because crypto has demonstrated risk-on behavior, like stocks. But Keiser disagrees, he says while short-term snapshots may give the impression of close correlation with stocks, over ten years Bitcoin shows no correlation with any asset class.

“The [Bitcoin] price is essentially going to infinity, in dollar terms because the dollar is going to zero. So it’s on its own vector, it’s not correlated to anything.”

As inflation bites, Keiser sees Bitcoin climbing higher against the dying dollar. However, he apologetically states that those who missed out on accumulating at least 20 BTC face challenging times. Buying 20 BTC today would cost approximately $826,000.

Digital Asset Manager Eric Weiss pitched in to say ultimately, he thinks a fraction of a Bitcoin will be enough.