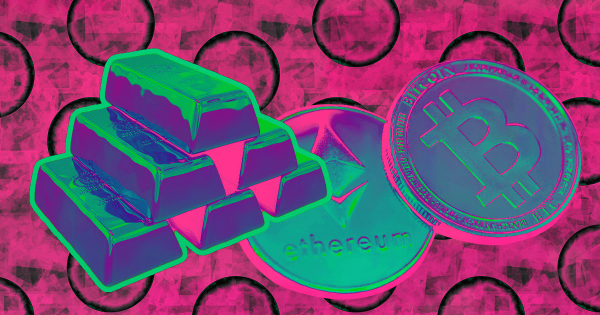 With the crypto market going through circles of red runs, gold-backed stablecoins like Pax Gold (PAXG) and Tether Gold (XAUT) are defying the odds and are returning positive returns for their investors, according to a Reuters report.

Gold-backed coins have been on the up in 2022

Per the report, the assets have performed positively even as the general crypto market has witnessed losses. PAXG has risen by 7.4% in 2022, while its closest competitor, XAUT, has increased by 8.5% within the same period.

Gainesville Coins’ chief market analyst Everett Millman said many people are concerned that most digital assets are not backed by anything so it makes sense to “attach them or link them to a real-world commodity.”

Bitcoin is now mostly referred to as the digital version of gold, so the decision to have some assets pegged against gold shows the significance of the precious metal to the world’s financial ecosystem.

Demand for gold-backed coins is rising

Demand for gold-backed these kinds of stablecoins is still relatively new.

Despite the huge disparity in the numbers, a cursory look at the data would show that the market is steadily growing as PAXG’s market value has doubled this year while that of XAUT has risen by more than 9%.

Speaking on the growing demand, the CTO of Tether, Paolo Ardoino, said:

Many of our investors were already involved in crypto, but were interested in not having their entire wealth in cryptos or dollars, and were seeking more inflation-resistant assets like gold.

Skeptics within the crypto space remain largely unconvinced about this new class of crypto assets. According to them, the price performance of the asset is only mirroring that of gold.

Galaxy Digital’s head of research Alex Thorn describes them as:

“Literally just IOUs that happen to be using blockchain infrastructure.”

Apart from that, the fact that these assets are still trying to gain ground in the market, plus their almost thin liquidity, puts them at a disadvantage in the eyes of some industry players.

While this can’t be denied, these coins undeniably offer a lower entry margin and ease of ownership for investors interested in gold.