Dfinity is suing Meta over the use of “its logo” Oluwapelumi Adejumo · 5 months ago · 2 min read
News › U.S.› Internet Computer › Legal

Dfinity is suing Meta over the use of “its logo”

Dfinity says Meta’s use of the logo could bring harm to its reputation. 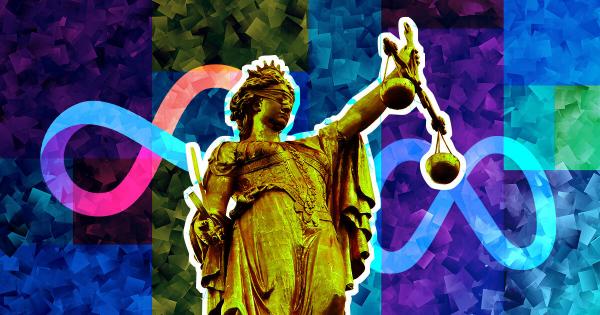 Dfinity Foundation, the developer of Internet Computer Protocol (ICP), has dragged Facebook’s parent company, Meta, to court over its use of the infinity symbol as its logo.

The lawsuit, filed in California, has Dfinity claiming that Meta uses the logo for the same reason it chose to register it.

Dfinity registered the logo before Meta

Dfinity registered the logo in 2018 at the United States Patent and Trademark Office for decentralized platforms and blockchain technology services. This is similar to Meta, which after rebranding from Facebook, revealed its Metaverse aspirations.

Dfinity, thus, claims that Meta is using the logo to attract the same set of users that it is targeting.

The non-profit foundation claimed that it has been using the logo since 2017, whereas Meta didn’t register it until March 2022. It also noted that it didn’t claim the color palette as a feature of the mark.

Therefore, it doesn’t matter that there are color variations between its logo and that of Meta. It claims that it has ownership rights on all variations of the logo.

Says Meta’s logo is harmful to its reputation

The details of the lawsuit first became public through Trademark attorney Josh Gorben, who posted it on Twitter. A part of the lawsuit states that Dfinity believes Meta’s logo use might harm its reputation.

Meta Platforms (Facebook) is being sued over its logo.

A Swiss non-profit that develops blockchain technology (Dfinity), has filed a lawsuit claiming that Meta's new logo is too similar to its own.

Apparently, an infinity logo is all the rage in Web3.#meta #Facebook #Web3 pic.twitter.com/4Ay4a12uKy

“Dfinity would be severely harmed in its development of the Internet Computer and its ability to attract users if they were to associate Dfinity with Meta’s sordid online privacy history.”

Dfinity also claims that Meta was aware of its use of the mark and still proceeded with obtaining registration.

“Meta chose to proceed with its application to obtain registration in some of the same or similar areas in which Dfinity has already obtained registration for its mark.”

Furthermore, there are similarities between the areas where both entities sought registration. When defining “Good and Services,” Meta used the same description as Dfinity in its trademark application.

The foundation now wants the court to stop Meta from using the logo and wants to get damages for what it called “serious reputational harm.”

It is hard to determine the chances of Dfinity winning the lawsuit as several brands, such as Infinity Speakers, Microsoft Visual Studio, Infinity Wealth Management, etc., also use the symbol for their logo.

Dfinity shot into the limelight after the collapse of its ICP token. ICP is currently trading for around $13, which is a steep decline in the asset’s value, selling as high as $700 as of May last year.

The DFINITY Foundation is a nonprofit organization that develops the Internet Computer, a public blockchain network designed to host smart contracts. Learn More